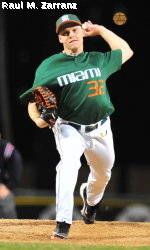 No. 9 UM Beats FAU Behind Big Nights From Ratcliff, Grundy

BOCA RATON, Fla. – Freshman second baseman Frankie Ratcliff drove in four runs, scored three and hit his second homer of the season as the ninth-ranked University of Miami baseball team picked up an 8-5 win over FAU Tuesday night at the FAU Baseball Stadium.

The win – Miami’s sixth straight – pushed the `Canes record to 21-7 overall this year while FAU dropped to 16-12. The victory also marked the second of the year for the `Canes against FAU after Miami won, 12-5, last week in Coral Gables.

The two teams will wrap up the season series in Coral Gables Wednesday night at 6 p.m. at Alex Rodriguez Park.

Freshman left-hander Jerad Grundy (1-0) turned in his best outing of his young career, holding FAU to just one run on two hits while striking out two in six innings of work to earn his first career win.

Seven of Miami’s eight runs on the night came with two outs – including Ratcliff’s three-run blast in the fourth and Yasmani Grandal’s two-run homer in the third. Ratcliff finished the night 2-for-4 with a homer, a single and a walk while Grandal also had a pair of hits, going 2-for-5 with a double to go along with his fourth homer of the year.

Stephen Perez had a team-high three hits for Miami while Nathan Melendres finished 2-for-4 with a run.

Iden Nazario struggled in relief of Grundy before E.J. Encinosa tossed a scoreless inning and a third and Miranda a scoreless ninth to earn his first career save.

FAU starter Taylor Everist (2-6) allowed six runs on seven hits in four innings of work to suffer the loss. Eddie Cassidy (2-for-4) was the lone Owl with multiple hits.

The Hurricanes jumped out to a 1-0 lead in the top of the first when Scott Lawson’s sacrifice fly to center scored Ratcliff, who had walked to lead off the game before reaching third on a Perez single.

UM rallied again in the third to go up 3-0. After Lawson doubled down the line in right with two outs, Grandal smacked a two-run, line-drive homer off the scoreboard in right to give Grundy a more comfortable lead.

Ratcliff then broke the game open in the fourth when he smacked another two-out homer for UM – this one a towering three-run blast to right-center, scoring Chris Pelaez and David Villasuso to put the `Canes up 6-1.

Dan Scheffler gave FAU its first run of the game in the bottom of the fourth with a solo blast to straight-away center.

The `Canes plated two more runs in the sixth with a RBI single by Ratcliff followed by a double to left by Perez that scored Ratcliff to give UM an 8-1 advantage.

FAU mounted a late comeback in the seventh, scoring four runs in the frame off Nazario to cut UM’s lead to 8-5 but Encinosa and Miranda closed the door.