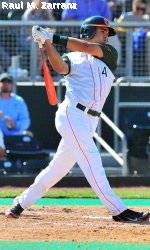 ORLANDO – The 13th-ranked University of Miami baseball team recorded season-highs for runs and hits as the Hurricanes cruised to a 19-2 victory over UCF Tuesday night at Jay Bergman Field. Stephen Perez led UM’s offensive attack, going 4-for-6 with six RBI while starter Steven Ewing (2-0) pitched well for the second straight start to open his career as Hurricanes improved to 8-3 on the season.

Perez, who had just four RBI in 10 games coming in, recorded a third of UM’s 18 RBI on the night. The highlight of his performance at the plate came in the seventh, when his first career homer came in the form of a grand slam blast to right that put the `Canes up 13 at the time.

Perez was joined at the plate by Harold Martinez and Nathan Melendres, who each went 3-for-6 with a pair of runs against the Knights. Martinez also hit his team-leading fourth homer in the game and finished with two RBI. Frankie Ratcliff, making just his second career start at second, finished 2-for-4 with three RBI and a team-high four runs scored.

The Hurricanes scored at least one run in all but two innings – including multiple runs in the third, fourth, fifth, seventh and eighth.

Ewing – pitching in his hometown against his former high school teammate and UCF starter Brian Adkins – allowed just two runs on three hits while walking three and striking out one in six innings to earn the win. Jerad Grundy, Joe Lovecchio and Taylor Wulf – making his first appearance in nearly a year – finished off the game on the mound for the `Canes.

A lead-off double by Zeke DeVoss in the top of the first eventually led to Miami’s first run. Perez quickly moved him to third with a deep fly ball to center before Scott Lawson’s grounder to second scored the speedy DeVoss easily to put UM up one.

Martinez made it 2-0 in the second with a towering solo homer to left-center.

UM pushed its lead to 5-0 in the third with three more runs. The first run came across on a throwing error by third baseman Chris Taladay after a bunt single by Perez, the second run on another RBI grounder to second by Lawson and the final run of the frame came in on a Pelaez sacrifice fly. The inning featured a pair of UM hits and a pair of UCF errors.

The Hurricanes really jumped out to a big lead in the fourth, scoring three more runs to go up 8-0. A couple more UCF errors accounted for some of the damage to go along with hits by Melendres, Ratcliff and Perez for UM.

In a repeat of the inning prior, Miami scored three in the top of the fifth before UCF scored a lone run in the bottom of the inning, bringing the score to 11-2 after five.

The game got out of hand from there, as Miami scored five in the seventh – highlighted by Perez’s grand slam – and three more in the sixth to pull away for their biggest win of the season.

The Hurricanes will return to the field this weekend when they play host to Boston College in the Atlantic Coast Conference opening-series for both teams. Game one of the series is slated for Friday, March 12 at 7 p.m. at Alex Rodriguez Park. Tickets for the series can be purchased by calling 1-800-GO-CANES or by visiting www.hurricanesports.com.