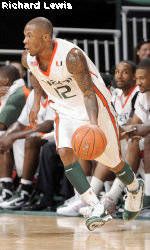 Allen was among a group of 12 – including five freshmen – to earn the recognition this season, requiring a student-athlete to earn a 3.00 grade point average for the previous semester and maintain a 3.00 cumulative average during his academic career.

A broadcast journalism major, the Baltimore-native is the eighth Hurricane to earn ACC All-Academic Team recognition since 2006. Miami trails only Duke, who has had nine players named to the academic team over that span.

Allen has seen action in 16 games this season, averaging 3.1 points per game, while converting 41.7 percent from long range. The freshman scored a season-high nine points versus South Carolina State and has hit a pair of threes in four games this season. In addition, his seven assists versus Nova Southeastern rank among the top-five assists performances by an ACC freshman this season.