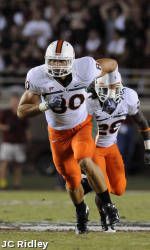 Graham, a senior tight end from Goldsboro, N.C., ranked second on the team in touchdown catches (5) and finished his only year of playing football with 17 catches for 213 yards. He played in all 13 games for the Hurricanes. Graham was a four-year standout on the Hurricanes’ men’s basketball team before the 2009 football season. He was named to the 2007 Men’s Basketball All-ACC Academic Team as a sophomore.

Pipho, a senior offensive lineman from LaPorte City, Iowa, started all 13 games at right tackle for the Hurricanes. He graded out at 90 percent and tallied 18 pancake blocks.

To be eligible for consideration, a player must have earned a 3.0 grade point average for the previous semester and maintained a 3.0 cumulative average during his academic career. All 12 ACC schools were represented by at least one selection on the team.