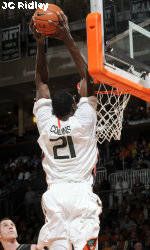 CORAL GABLES, FLA. – The University of Miami men’s basketball team plays host to Virginia Tech on Sunday, Jan. 31, at 1 p.m. to open a three-game stretch over seven days. Immediately following the re-match with the Hokies, the frequently-flying Hurricanes have back-to-back road games at Wake Forest (Tuesday) and Florida State (Saturday).

On Sunday, Miami’s coaching staff will participate in the annual Coaches vs. Cancer “Suits and Sneakers Awareness Weekend,” a collaborative initiative of the National Association of Basketball Coaches (NABC) and the American Cancer Society. Participating NABC-member coaches will wear sneakers instead of dress shoes with their usual game attire during weekend games to demonstrate their support for the Society and the fight against cancer. Fans are also encouraged to wear sneakers to games to demonstrate their support.

THE SERIES
With the 81-66 victory in Blacksburg on Jan. 13, Virginia Tech took the 9-8 all-time series lead over Miami. The Hokies have won four straight over the Hurricanes, including the 88-83 overtime decision in Coral Gables last season. Junior guard Malcolm Delaney leads the ACC in scoring — including averaging 23.4 points per game versus conference opponents, while racking up a league-leading 7.6 free throw attempts an outing. He went 14-of-16 from the line in his last meeting with UM.

The Hokies ride a three-game win streak into Coral Gables, including a 76-71 overtime decision at Virginia on Thursday. Delaney finished with a game-high 27 points, while Dorenzo Hudson (18 points) and JT Thompson (17 points) also added double-figure scoring. Thompson had nine points in the final 2:14 of regulation and five-minute OT.

HELPING HAITI
As part of a campus-wide effort to aid the people of Haiti, the University of Miami Department of Athletics will continue its fundraising efforts during Sunday’s game versus Virginia Tech, as students will be canvassing the arena to collect donations to support Haiti relief. The UM community has raised more than $3.76 million to support the University’s relief efforts in Haiti. Funds have been collected for the UM/United Way “Operation Helping Hands” which supports the UM Global Institute and the work of its doctors, nurses and students who are working directly with the victims of the earthquake.

In future games, the Hurricanes will be sporting a patch on their uniforms in support of Save Haiti Saturday, benefiting UM’s Global Institute.

UM is 65-24 (.730) at home under sixth-year head coach Frank Haith, including eight wins over ranked opponents. The Hurricanes have notched double-digit home wins at the BankUnited for the past two seasons and five times in six full seasons calling the arena home — and are one win shy of accomplishing that in 2009-10.

The Hurricanes defeated South Carolina (who just upset top-ranked Kentucky), 85-70, to claim the Charleston Classic title on Nov. 22… UM started three players in their first season playing for Hurricanes at Maryland on Tuesday — freshmen Durand Scott and Reggie Johnson, as well as sophomore Malcolm Grant… Through 20 games this season, seven different Hurricanes have led the team in scoring, including James Dews who has posted team-high points seven times this season… Adrian Thomas has hit a three-pointer in 14-straight games — the longest active streak in the ACC… Versus ACC competition, Malcolm Grant ranks among the top five in the league in assist/turnover ratio (second, 3.1:1), three-point field goal percentage (third, .438) and three-point field goals made (fourth, 2.3)… Former UM men’s basketball player Jimmy Graham (2006-09) has been invited to participate in the NFL Combine after playing one season with the Hurricanes football squad as a tight end and will participate in this weekend’s Senior Bowl on Jan. 30… Nine of 13 Hurricanes are freshmen or sophomores… The Hurricanes closed their non-conference slate with a perfect 14-0 mark — going undefeated in non-league play for just the second time in school history.

THROW YOUR HANDS IN THE AIR
After back-to-back double-figure rebounding performances, Dwayne Collins needs just 20 rebounds and one assist to become just the second player in Miami history to amass 1,000 points, 850 rebounds and 100 assists in his career. Eric Brown achieved the feat over his UM career (1985-89).

With 10 boards at Maryland, Collins — who ranks fifth in the ACC with 8.8 rebounds per game and is third in the league with 8.5 boards versus conference competition — knocked former teammate Anthony King out of seventh place in the UM recordbook with 830 career rebounds. With 26 more boards, Collins will move into Miami’s top five in career rebounding leaders.

Collins is averaging 1.5 blocks per game versus conference competition — tied for seventh best in the ACC.  With 21 blocks this season, he has already registered more than he did in full seasons as a freshman and sophomore.

HE’S LEGENDARY
Former Hurricane Will Allen is among 12 former basketball players that have been selected to the 2010 ACC Tournament Legends class that will be honored at this year’s ACC Men’s Basketball Tournament in Greensboro, N.C.

Allen, UM’s first African-American basketball player who led the Hurricanes in scoring and rebounding in 1971, closed his career sixth on the Miami career scoring list with 1,293 points and second in career rebounds with 913. The Rockville, Md., native averaged 17.2 points and 12.2 rebounds per game for his 75-game career, topping the 20-point mark 28 times during his three years at UM.

TICKET INFORMATION
Miami five-game ACC packs start as low as $75 and single game tickets start as low as $10. For more information, please contact the Hurricane Ticket Office at 1-800-GO-CANES or visit us online at hurricanesports.com.