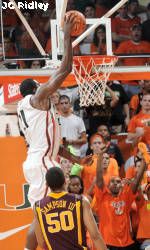 It is the earliest ACC opener for the Hurricanes since starting the conference slate with a home win over Georgia Tech on Dec. 3, 2006. Miami last opened its league schedule versus the Eagles on Dec. 8, 1998. The Hurricanes won that Big East match up, 77-64, in Miami.

This marks the third-straight season that Miami has traveled to Boston College for its first ACC road game of the season. UM split those appearances, defeating the Eagles, 77-71, on Jan. 10, 2009, to snap a 10-year skid in Chestnut Hill.

Conference foes in both the Big East and ACC, Boston College has proved a tough contender for Miami over the years. The Eagles lead the all-time series 22-11, however the Hurricanes have won three straight over Boston College by an average of 10 points — including their last meeting in Chestnut Hill.

Miami rides an eight-game win streak into Sunday’s ACC showdown, while the Eagles have won two straight. Both the Hurricanes and Eagles were victorious in their Big Ten/ACC Challenge games on Wednesday evening, with Miami defeating Minnesota at home, 63-58, and the Eagles downing Michigan on the road, 62-58.

ON THE ROAD AGAIN

Although Miami is 3-0 in games away from home this season – with South Carolina certainly holding the “home court advantage” in the championship game of the Charleston Classic on Nov. 22, Sunday marks the first game on an opponent’s home court for the Hurricanes in 2009-10.

As of Dec. 5, the Hurricanes are among 19 teams — out of 347 NCAA Division I men’s basketball programs — that remain undefeated. With eight wins, Miami and Texas Tech have accumulated the most victories among unbeaten programs across the country.

Miami is 8-0 for the second time under head coach Frank Haith — the first occurring in 2007-08 en route to a 12-0 start and an NCAA Tournament berth – and for the fifth time in program history. UM has advanced to the postseason in all four previous instances.

Freshman Durand Scott scored a season- and game-high 20 points, including consecutive breakaway baskets in the final minute, as the Hurricanes remained unbeaten by rallying past Minnesota, 63-58, in the Big Ten/ACC Challenge on Wednesday. It marked the 15th consecutive non-conference regular season win for UM.

Malcolm Grant scored 16 points off the bench for the Hurricanes and James Dews added 11. Grant connected on a season-high tying four three-pointers, and has hit a three-pointer in every game this year, tying him for the fourth-longest active streak in the ACC.

Scott ranks among the ACC’s freshmen leaders in just about every statistical category this season — turning in the league’s top-two (and three of the top four) assists performances in 2009-10, while averaging an ACC freshmen-high 4.5 assists per game, which ranks among the top 10 versus all ACC players. He is also among the freshmen leaders in scoring average, single-game points, rebounding average and single-game rebounds.

With nine points in the win over Minnesota, senior Dwayne Collins became the 30th Hurricane with 1,000 career points. He has scored in double figures 44 times over his career, including four games this season. Collins posted a career-high 26 points in the win over Duke on Feb. 20, 2008, on 12-of-14 shooting, and added a school-record 8-for-8 performance from the field for a season-high 22 points in the Charleston Classic victory over Tulane on Nov. 19.

The Hurricanes have taken pride in their defense this season and have kept opponents to an average of 56.5 points per game on 38.2 percent shooting. In the Nov. 28 win over USC Upstate, Miami forced 21 turnovers and held its opponents to just 41 points — the fewest points for a UM opponent since a 94-41 victory over North Florida on Dec. 31, 2008.

Miami — who is third in the ACC with 9.6 steals per game after ranking 11th in that category last season — grabbed a season-high 14 steals versus USC Upstate.