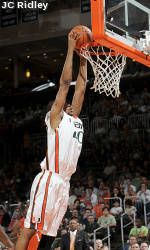 CORAL GABLES, FLA. – The 7-0 University of Miami men’s basketball team plays host to Minnesota in the 2009 Big Ten/ACC Challenge on Wed., Dec. 2, at the BankUnited Center. The game will be carried live on ESPNU at 7:30 p.m.

Miami is participating in the Challenge for the fourth time in 2009 — and its second-straight season as hosts. It marks the 11th year for the event, featuring the top college basketball programs playing for conference supremacy and the Commissioner’s Cup. The ACC has won the Commissioner’s Cup in all 10 previous years.

Please note the game has moved slightly back from its originally scheduled 7:15 time to accommodate television.

Wednesday marks the first meeting between the Hurricanes and the Gophers. Tubby Smith’s Minnesota squad rides a two-game skid into Coral Gables after dropping contests to Portland and Texas A&M at last weekend’s 76 Classic in Anaheim, Calif. The 4-2 Gophers, ranked as high as No. 16 in the country just last week, return four starters from their 2009 NCAA Tournament squad.

The 7-0 Hurricanes continue to collect votes and are 30th in both polls for this week. UM received 47 votes in the USA Today/ESPN Coaches Poll this week and 77 votes in the AP Poll.

As of Nov. 30, the Hurricanes are among 30 teams — out of 347 NCAA Division I men’s basketball programs — that remain undefeated entering the second month of competition. With seven wins, Miami and Texas Tech have accumulated the most victories among unbeaten programs across the country.

Miami is 7-0 for the second time under head coach Frank Haith — the first occurring in 2007-08 en route to a 12-0 start and an NCAA Tournament berth.

This is the fifth time Miami has won its first seven games of the season in program history — advancing to the postseason in all four previous instances. The Hurricanes have won their first eight games in four previous seasons.

Before Wednesday’s game, head coach Frank Haith will be recognized for his achievements over last summer, serving as an assistant coach for USA Basketball’s World University Games men’s basketball team. The team practiced at the U.S. Olympic Training Center in Colorado Springs, Colo., in July before departing for the Games in Serbia where the team went 6-1 en route to a bronze medal.

Haith served as an assistant on Bo Ryan’s staff, alongside Rob Jeter (Wisconsin-Milwaukee). Coaching staff selections were made by the USA Basketball Men’s Junior National Team Committee, chaired by Syracuse head coach Jim Boeheim. The World University Games are held every other year.

NEXT UP FOR THE ‘CANES

The Hurricanes close a three-game homestand on Wednesday versus Minnesota before heading north for their ACC opener at Boston College on Sun., Dec. 6. Fox Sports Net will carry the game, while Fox Sports Florida will broadcast it locally.

It is the earliest ACC opener for Miami since starting the conference slate with a home win over Georgia Tech on Dec. 3, 2006. UM last opened its league schedule versus the Eagles on Dec. 8, 1998. The Hurricanes won that Big East opener, 77-64, in Miami.