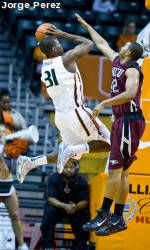 CORAL GABLES, Fla. — DeQuan Jones scored a career-high 16 points to lead three Hurricanes in double figures as the University of Miami men’s basketball team improved to 6-0 with the 77-58 win over Florida Gulf Coast (0-4) on Wednesday evening at the BankUnited Center.

Jones shot 6-for-8 from the field, posted five rebounds and added an assist, block and steal, as the Hurricanes grabbed a season-high 13 on the evening. James Dews hit a career-high tying 5-of-6 three-point attempts en route to 15 points, a season-high three steals and two assists. Malcolm Grant, who returned to the starting lineup versus the Eagles, finished with 14 points – including a season-high four threes, five rebounds, four assists and a pair of steals in the win.

The Hurricanes snapped their streak of five-straight 50 percent shooting games, converting 40 percent of their field goals – while attempting a Miami program-high 36 three-pointers. UM was out-rebounded for the first time this season, by a one board margin, but forced a season-high 23 turnovers by the Eagles.

The Hurricanes scored the first eight points of the game – including a pair of threes by Dews – as the senior got the home team off to a hot start. A Grant three-pointer – the first of a season-high four, extended Miami’s lead to 10 points, up 19-9 with 9:45 to go in the opening stanza.

Miami grabbed seven first-half steals and would lead by as many as 18 points before taking the 39-23 lead into the break. The Hurricanes have led at the half in all six games this season.

With back-to-back baskets from Jones and Durand Scott, Miami took the 20-point advantage, up 42-23, just 47 seconds into the second half. Florida Gulf Coast could only get as close as 16 points and the Hurricanes led by as many as 26 points with 6:57 remaining in the game.

The Eagles, who converted just 1-of-13 three-point attempts, was led by Anthony Banks with 15 points.

Miami improved to 6-0 for the second time under head coach Frank Haith, who led the Hurricanes to a 12-0 start in 2007-08 en route to a second-round NCAA Tournament appearance.