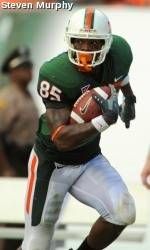 MIAMI (AP) – Jacory Harris had his aching right thumb heavily taped for the game, and his arm was in a sling afterward.

Turns out, the sound of Duke players singing was the best medicine.

Harris threw for 348 yards and two touchdowns, Darryl Sharpton capped his final home game with a 73-yard interception return for a score, and No. 21 Miami staved off a Duke challenge for the fourth straight year in a 34-16 win Saturday.

“What really turned everything around was something that happened in the tunnel,” Harris said. “We were coming out and Duke was just cheering, singing songs, basically like they’ve got this game won. Right there, that kind of lit a flame inside my soul. I was like, ‘I can’t let this happen.”‘

Damien Berry’s 2-yard touchdown run early in the fourth quarter opened the floodgates for Miami (8-3, 5-3 Atlantic Coast Conference). Leonard Hankerson had career bests of eight catches and 143 yards – including a 44-yard score – for the Hurricanes, who scored the final 24 points to keep hope alive for their first 10-win season since 2003.

Thaddeus Lewis – playing in his hometown – finished 20 of 37 for 303 yards for Duke (5-6, 3-4), taking over the school’s all-time lead in passing yardage with 9,678. Donovan Varner caught eight passes for a career-high 165 yards and a touchdown for the Blue Devils, who have now lost 55 straight away from home against ranked opponents, dating to October 1971.

“It’s frustrating, but it’s just another ACC game. I can’t make this personal just because I’m from Miami,” said Lewis, who – like his good friend Harris – was also hampered, his injury being a bad ankle. “It’s frustrating because we had an opportunity to keep bowl eligibility alive. We were right there and we let it get away.”

The Blue Devils were seeking their first postseason appearance since the 1994 season.

“Their bowl dreams slipped away, but certainly not anything they’ve built in a two-year period will slip away,” Duke coach David Cutcliffe said. “Every game, whether we won or loss, is building. We’re growing.”

Duke took a 16-10 lead on Will Snyderwine’s third field goal of the game, a 26-yarder early in the third quarter.

Everything went Miami’s way after that.

“We were supposed to be winning by 30 or so points,” Sharpton said. “That’s how we feel.”

Berry – with the crowd announced at 38,200 chanting his name throughout the drive – scored with 13:41 left to cap a 15-play, 90-yard march and put Miami ahead to stay. Hankerson’s TD grab, stretching over the goal line while being tackled, made it a two-score game. Then Sharpton made his first career interception count 90 seconds later, picking Lewis off and streaking to the end zone.

Harris completed 25 of 43 passes and now has 3,003 yards this season, making him the seventh Miami quarterback with a 3,000-yard season and the first since Ken Dorsey in 2002.

Miami converted 14 of 21 chances on third down, compared with Duke going 3 for 12.

“Third down was unbelievable,” said Miami coach Randy Shannon, who hadn’t won more than seven games in either of his first two seasons.

Miami was a three-touchdown favorite, which only goes to show that oddsmakers paid little attention to series history.

It’s hardly been a one-sided set of recent meetings.

– In 2006, the Hurricanes went to Durham and needed a last-second interception of a pass by Lewis at the goal line to seal a 20-15 win.

– Last year, Duke led 24-14 in the third quarter before Harris put on a show, getting four of his five TDs in the second half and leading Miami to a 49-31 win, a game in which Cutcliffe acknowledged this week his team “just really shut down.”

It was more of a wearing down in this one.