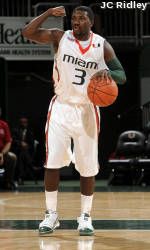 CORAL GABLES, Fla. – Senior led four Hurricanes in double figures as the University of Miami men’s basketball team cruised to the 108-58 win over Nova Southeastern on Monday evening at the BankUnited Center.

Dews converted a career-high five-of-seven three-pointers en route to a game-high 19 points as the Hurricanes hit 14 shots from long range at a 51.9 percent clip. It is the most three-point baskets since Miami hit a school-record 15 treys versus Georgetown on March 3, 1993. Six Hurricanes connected from beyond the arc on Monday, as , , , and added to the three-point barrage.

“Obviously we played very well,” said sixth-year Miami head coach . “We shot the ball very well, I thought our defensive intensity was good in the first half. There were a lot of great things we saw out there today. We executed very well.

Dews opened the game with a three-pointer and Miami would nail nine shots from beyond the arc in the first 10 and a half minutes to take the 35-9 lead. The Hurricanes converted 12-of-17 first half three-pointers – 70.6 percent – to take the 61-18 halftime lead.

Scott, the reigning ACC Rookie of the Week, added 14 points, a game-high eight assists and five rebounds for Miami, who dished out 26 assists on the evening – the most since a school-record 29 versus Florida Southern on Nov. 9, 2007.

All 13 Hurricanes scored as Miami got 51 points from the bench, including 17 points and four assists from Grant and 10 points from Adams. Allen scored eight points for the Hurricanes – while handing out a season-high seven assists, with just one turnover.

Brian Cahill led the Nova Southeastern effort with 14 points, including hitting all three of his three-point attempts.

The Hurricanes hit the road for the first time this season, heading north to the Charleston Classic in Charleston, S.C. Miami opens the tournament versus Tulane on Thurs., Nov. 19, at 1:30 p.m. in a game to be broadcast live on CSS, and will face either 2009 NIT champion Penn State or UNC Wilmington in the second round on Fri., Nov. 20, on CSS. The final round of games will be held on Sun., Nov. 22. Potential Sunday opponents are South Carolina, Davidson, USF and La Salle. The 6 p.m. championship game will be carried by ESPN2.