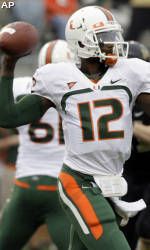 Harris threw for 330 yards and three touchdowns for the Hurricanes (6-2, 3-2 ACC), who trailed 27-14 going into the fourth quarter. Miami took advantage of a muffed punt to score a touchdown, then took its first lead when Harris directed an 82-yard scoring drive in the final minutes that ended with Benjamin’s diving catch near the left pylon.

Riley Skinner threw for 349 yards and two touchdowns for the Demon Deacons (4-5, 2-3), but may have sustained a concussion when he took a hard hit on a keeper that ripped off his helmet with about 6 1/2 minutes left. The four-year starter sat out the rest of the game, watching backup Ryan McManus direct Wake Forest’s desperate final drive.

McManus got the Demon Deacons across midfield to set up a 60-yard field goal attempt from Jimmy Newman, but the kick fell well short on the game’s final play.

It was a frustrating finish for the Demon Deacons, who scored the first 17 points and looked to be in control until Harris directed the decisive final drive.

Wake Forest made several costly mistakes, including a 45-yard missed field goal by Newman and a couple of dropped interceptions in the fourth quarter. But none were bigger than when punt returner Devon Brown fumbled the catch on one of Matt Bosher’s numerous booming kicks and Miami recovered at the 2-yard line. On the next play, Harris connected on a short pass to Tervaris Johnson that made it 27-21 with 11:47 to play.

Skinner directed the Demon Deacons to 555 total yards, while the defense frustrated Harris and the Hurricanes much of the afternoon. Miami, which was coming off an overtime home loss to Clemson, managed 356 total yards – a big chunk of it coming late in the game.

Chris Givens and Tommy Bohanon each had touchdown catches for the Demon Deacons, who have lost three straight games.