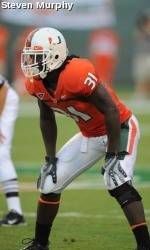 Matt Bosher kicked a 22-yard field goal on Miami’s overtime possession, but on third-and-11, Parker’s third TD pass of the night gave the Tigers (4-3, 3-2 Atlantic Coast Conference) their first win over a ranked opponent in nine games — and dealt Miami’s ACC hopes a serious blow. C.J. Spiller had a 90-yard kickoff return and a school-record 310 all-purpose yards for Clemson.

The Hurricanes could have had fourth-and-goal from inside the Clemson 1 in OT after the Tigers were offside on Bosher’s third field goal of the game. But they kept the points on the board, turning it over to the defense.

And Parker–who picked apart the middle of the field all day–found Ford, a South Florida native, for the winning score. Parker finished 25 of 37 for 326 yards.

It was the third meeting of these teams since Miami joined the ACC; all three went to overtime, and all three have been won by the road team.

After the way regulation was nothing but wild back-and-forth–nine lead changes in the final three quarters–it couldn’t have been too surprising that this one needed more than 60 minutes before getting settled.

Spiller had a 90-yard kickoff return for a touchdown just before halftime, then a 56-yard TD catch midway through the third quarter. Both came on Miami breakdowns; the Hurricanes didn’t want Alex Uribe to kick it deep to Spiller on the return for a score, and the TD catch came when he was covered by linebacker Sean Spence, who battled an injured left knee all day.

Both defenses offered major scoring swings, too. Allen Bailey sacked Parker, knocking the ball loose and setting up Marcus Robinson’s 53-yard rumble for a score that gave Miami a 24-21 lead. And in the fourth, DeAndre McDaniel returned his second interception of the day for a 23-yard touchdown, putting Clemson up 31-27.

Harris remained cool under pressure, just as he has all season.

On Miami’s very next play, he connected with Travis Benjamin for a 69-yard touchdown, a lead that looked likely to hold up when Randy Phillips intercepted Parker in the end zone about 4 minutes later. But the Tigers got another chance, Richard Jackson’s 30-yard field goal with 5 seconds left tied the game at 34.

Clemson’s first quarter was about as terrible as the Tigers could have ever imagined. Jackson missed a 41-yard field goal on the opening possession, and Clemson had a first-and-10 inside Miami territory six minutes later–only to have a 20-yard sack followed by holding and clipping penalties, all adding up to a third-and-49.

And it was still scoreless until Matt Bosher connected on a 49-yard field goal for Miami early in the second quarter.

Eventually, Parker settled down, hitting his stride by going 6 of 8 for 69 yards on the Tigers’ fourth drive, capped by tight end Michael Palmer’s thrice-juggled catch that ended up going for a 15-yard touchdown. Miami answered quickly Damien Berry’s 23-yard rush giving the Hurricanes the lead again, 10-7 with 57 seconds left in the half.

It only set up Miami’s worst minute of the season.

He caught the ball at the 10, turned right, cut back left and was gone– untouched into the end zone, putting Clemson on top 14-10. Miami had a chance to reclaim the lead before halftime, but Harris’ pass into the end zone had an open Jimmy Graham turning the wrong way, and the Hurricanes grumpily went into the locker room down by four.

Nearly three hours later, they went back to the locker room, feeling even worse.