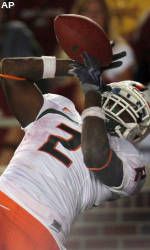 Hurricanes Hold Off Seminoles For 38-34 Win

And the Hurricanes defense came up huge when it mattered most.

The sophomore quarterback threw for 386 yards – including a 40-yard pass over double coverage to Travis Benjamin, setting up Graig Cooper’s 3-yard touchdown run with 1:53 left – and led the Hurricanes past No. 18 Florida State 38-34 in a wild, back-and-forth game on Monday night.

Florida State got to the Miami 2 with 14 seconds left. But Christian Ponder threw three straight incompletions, the last coming on a ball that Jarmon Fortson nearly caught in the end zone on the game’s final play, and Miami escaped.

Harris completed 21 of 34 passes for two touchdowns and two interceptions. He got hurt on the second of those turnovers; Harris was drilled by blitzing cornerback Greg Reid and his throw on that play resulted in nothing more than a pop fly that Markus White ran back 31 yards for a 31-24 Florida State lead with 11:45 remaining.

Harris walked to the sideline, holding his right arm tightly to his chest, indicating a shoulder injury.

He was fine. Better than fine, actually.

“It was just a bad funny bone incident,” Harris said. “My whole arm went numb. I had to fight through. I had to help this team win.”

Harris connected with Cooper for a 24-yard score to tie the game at 31, and after Florida State took the lead again on Dustin Hopkins’ 45-yard field goal with 4:11 left, the ‘Canes went back to work. They went 59 yards in six plays, Harris’ perfect lob to Benjamin accounting for most of them, and Cooper plowed in for the go-ahead score.

Ponder, who ran for 144 yards against Miami last year, went 30 yards on a draw play to get deep into Hurricanes territory with 1 minute left. When Brandon Harris was flagged for pass interference, Florida State had 14 seconds to go 2 yards and win the game.

First down, Harris tipped the ball away from Fortson.

Third down, Fortson got his hands on the ball as he hit the ground – and it squirted away. After review, Miami could celebrate.

“I was just thinking my team fought through this so long and so hard. All the preparation and it came down to this,” Jacory Harris said of watching the final series from the sideline. “Our defense, I know they was going to pull through at the end because that’s what they’ve been doing.”