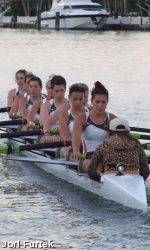 Oak Ridge, Tenn. – The University of Miami rowing team advanced a boat into the Open 4+ “D” finals, while the Second Varsity Eight advanced in the “C” finals in day one action Saturday at the Aramark Sprints South/Central Regional Championships at Lake Melton in Oak Ridge, Tenn.

The Hurricanes’ Open 4+ boat of Nicole Miller (bow), Molly Beigelman (2), Stephanie Kane (3), Natalie Snyder (stroke) and Alexa Romero (coxswain) turned in a time of 8:43.56 in the prelims in order to advance to the semifinals of the event tomorrow at 9 a.m.

“The venue here is awesome and the competition is phenomenal for us,” expressed UM interim head coach Boban Rankovic. “The weather has been in our favor, and it’s just been great for racing. We have been 30 seconds faster than usual, and it’s just been really exciting.”

The Open 4+ boat will also be in the “C” finals in Sunday’s action.

“We are hoping to place high in `C’ finals tomorrow, and the kids know they have a chance to do that as well,” added Rankovic. “Tomorrow is the last race of our season, and everybody wants to make it the best race of the year and have a positive mindset. Everybody wants to perform at their best.”

The Varsity Eight crew for UM came in with a time of 6:56.41 in their heat, trailing Kansas in fifth place. The boat was crewed by Kate Rickers (bow), Rchael Sporko (2), Karalyn Van Aken (3), Sarah Medland (4), Monika Sajincic (5), Stephanie Parrish (6), Emily Wingrove (7), Molly Thornton (stroke) and Christina Crocco served as the coxswain for the Hurricanes.

Sunday will mark the finals of the regional championships for both the South and Central areas. With the establishment of the groupings, regional championships were also developed. In the Central Region, Oak Ridge’s Melton Hill Lake was chosen as the site of the inaugural competition in 1997 and has hosted ever since. It was selected by the coaches because of its geographically-centralized location and its recognition as one of the nation’s best courses.

“The entire team and staff are all performing to their best ability, and that’s all a coach can ask,” ended Rankovic.

For more information on the South/Central Regional Championships, as well as up-to-date schedules and standings, please visit www.hurricanesports.com.