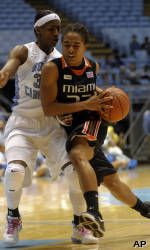 GREENSBORO, N.C. – The University of Miami women’s basketball (13-17, 2-12) fell 76-59 to Boston College in the opening round of the ACC Tournament at the Greensboro Coliseum.

Freshman Shenise Johnson led the Hurricanes with 13 points and eight rebounds.  The ACC All-Freshman team member found heself in early foul trouble and had only three points at the half.  However, in the second, she scored ten including eight straight for Miami down the stretch.

It was the final game in the careers of seniors Lamese James, LaToya Cunningham and and Latoya Drake.

Carolyn Swords and Stefanie Murphy combined for six low-post hoops in four critical minutes as the seventh-seeded Eagles dispatched the 10th-seeded Hurricanes to advance to Friday’s quarterfinals against second-seeded Florida State. Virtually unheard from in the first half, the 6-foot-6 Swords and 6-4 Murphy worked well in a high-low tandem that Miami found tough to stop. Swords scored 16 of her game-high 20 points in the second half and went 10-for-12 from the floor on the night.

“By far it is the best Boston College has played.  We played them three times and it is a credit to them,” said head coach Katie Meier.

Much of the Eagles’ postseason resume is identical to last season’s, but the obvious difference is in the RPI. BC began Thursday at 35th and may get a bump in that department even if loses to No. 10 FSU. Last year, the Eagles stood 68th on the chart, which is one of several factors the NCAA tournament selection committee uses in determining at-large selections. While not necessarily a major criterion, the RPI is a good predictor of the field. In this decade, no ACC team in the Top 40 has been excluded.

The Eagles hope March will be more favorable than the brutal February, in which they faced six ranked teams.

“That month definitely made our team a stronger team,” coach Sylvia Crawley said.

Crawley, a center on North Carolina’s ACC and NCAA championship team of 1993-94, maximized the Eagles’ interior advantage by alternating her two post players between the top of the key and the block. The high-post occupant was able to get a good look into the interior because 6-5 Ashley Sours, the tallest Hurricane, couldn’t be everywhere. The two Eagles directly hooked up on three important baskets during the stretch, which expanded on a four-point Eagle lead.