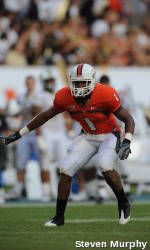 Shannon, a senior center from Miami, Fla., was one of only two players to start all 13 games for the Hurricanes in 2008. He is finishing up his masters in enrollment management.

Harris, a defensive back majoring in sports administration, played in all 13 games for the Hurricanes and tallied 30 tackles and an interception. He had two tackles for loss and three pass breakups. He also returned 13 kicks for 274 yards.

Byrd, a wide receiver who hails from Boutte, La., caught 21 passes for 228 yards and four touchdowns. He averaged 10.9 yards per catch. He hauled in the game-tying touchdown in the overtime win at Virginia and also had TD receptions against California, NC State and Duke.

To be eligible for consideration, a player must have earned a 3.0 grade point average for the previous semester and maintained a 3.0 cumulative average during his academic career. All 12 ACC schools were represented by at least one selection on the team.