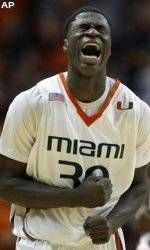 The Demon Deacons struggled throughout on offense and shot a season-low 31.7 percent, including 3-for-20 from 3-point range. Miami led 29-26 at halftime, then pulled away by outscoring Wake Forest 25-8 over the first 9:10 of the second half.

McClinton scored 14 consecutive points for the Hurricanes late in the game. When it ended, fans poured onto the court to celebrate the largest margin of victory over a top 10 opponent in school history.

The Hurricanes (15-7, 4-5 Atlantic Coast Conference) snapped a three-game losing streak at the start of a three-game stretch against top 10 teams — and teams that have been ranked No. 1 at some point this season. They visit No. 4 Duke on Saturday and will be at home against No. 3 North Carolina on Feb. 15.

Wake Forest (17-3, 4-3) hasn’t won since beating then-No. 1 Duke a week ago. The Demon Deacons lost in the final second at Georgia Tech on Saturday.

McClinton finished 11-for-19 from the field, including 6-for-10 from 3-point range, and had three steals and two assists. Junior Adrian Thomas was 4-for-5 beyond the arc and tied a career high with 14 points.

Jeff Teague scored 19 points for Wake Forest but missed all five of his 3-point tries. Freshman Al-Farouq Aminu had five turnovers and scored only four points, nine below his average.

The Demon Deacons came into the game shooting 50 percent this season, but they struggled from the start to find the range against Miami, scoring only eight points in their first 15 possessions and shooting 33 percent in the first half. The lead changed seven times in the half before DeQuan Jones scored on a breakaway dunk to give Miami a 29-26 halftime lead.

The Hurricanes, hoping to mount a February surge for the second straight year, led the entire second half. They missed only one shot during a stretch when they outscored Wake Forest 16-6 to go ahead 45-32, and Thomas’ final 3-pointer put Miami up 54-34.