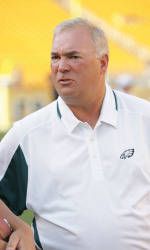 CORAL GABLES, Fla. – Mark Whipple has been named the new offensive coordinator at the University of Miami. A veteran of 27 seasons as a coach on both the collegiate and professional levels, Whipple inherits a unit that returns nine starters, an experienced young quarterback, one of the top running back tandems in the Atlantic Coast Conference, a talented group of receivers and an offensive line that returns three starters.

“Mark has been successful in every phase of his career,” Miami head coach Randy Shannon said. “He developed a Super Bowl quarterback in Ben Roethlisberger, won a national championship as the head coach at UMass and created an effective and potent offense most recently for the playoff bound Philadelphia Eagles. Aside from being innovative at his craft, Mark is a tremendous individual who will positively impact our student-athletes on and off the field.”

Whipple, 51, spent the 2008 season as an offensive assistant coach with the Philadelphia Eagles helping the team to an appearance in the NFC championship game. Before joining the Eagles, he served as the quarterbacks coach of the Pittsburgh Steelers from 2004-06 where he was instrumental in the development of Ben Roethlisberger, who became the youngest starting quarterback to win a Super Bowl. In 2004, Roethlisberger became the first NFL quarterback to finish a season undefeated with a 13-0 record in games he started.

“I am excited to work with Randy Shannon,” Whipple said. “I feel like we’re going to be a great team. Coach Shannon and I have been on the same page from day one. Our goal is to win a national championship. The one thing I haven’t done is win one at the I-A level. It’s been a goal of mine for a while now. I couldn’t think of a better place to work toward that goal than the University of Miami.”

Prior to his move to the NFL, Whipple coached 16 seasons as a head coach at the collegiate level compiling an overall record of 121-59 (.672) at stops at the University of Massachusetts, Brown and New Haven.

While at UMass, he posted a 49-26 (.653) record in six years (1998-2003) leading the Minutemen to a Division I-AA National Championship in his first season with the team in 1998. He also won a pair of conference championships. His 1998 national championship team finished with a school record in wins finishing the season 12-3. He was named National Coach of the Year by the American Football Coaches Association and Don Hansen’s National Weekly Football Gazette in 1998 and earned Atlantic 10 Coach of the Year honors in 2003. He was selected as the New England Coach of the Year by the New England Football Writers and the Gridiron Club of Greater Boston in both 1998 and 2003. He posted five winning seasons in only six years as head coach. He coached nine different players who won first team All-America honors.

At every stop in college, the trademark of a Whipple-coached team was a high-powered offense. His UMass teams rewrote the record books, setting more than 40 team records. In 1998 his national championship team posted school records in points scored (524), touchdowns (73), total yards (7,074), passing yards (4,050), completions (306) and first downs (354). While at Brown, his 1997 squad set Ivy League and school records for total offense (474.3 yards per game) which included a single-game record of 629 yards against Yale. His 1995 team set several single-season records including most points (282), total offense (4,165 yards), passing offense (2,502 yards) and first downs (227). While at New Haven, his 1992 squad led all NCAA divisions in scoring offense (50.5 points per game) and total offense (587.7 yards per game). His 1993 New Haven team was named Sports Illustrated’s “Best Offense in College Football” while averaging 52.5 points and 557.6 yards of total offense per game.

The Tarrytown, N.Y., native’s coaching career began in 1980 as an assistant at St. Lawrence University. Whipple made four more stops over the next seven years (Union College, 1981-82; Brown, 1983; Arizona Wranglers of the USFL, 1984; New Hampshire, 1986-87) before landing his first head coaching appointment.

A 1979 graduate of Brown, he was the Bears starting quarterback from 1977-78, leading the team to a 13-5 record as a starter. He was inducted into the Brown Athletic Hall of Fame in 1996. Whipple earned a bachelor’s degree in political science. He was a member of the school’s first-ever Ivy League championship team in 1976. He was also a four-year letterman on the Bears baseball team.

He and his wife, Brenda, have two sons, Spencer, a redshirt freshman quarterback on the UMass football team, and Austin, a high school freshman.

“Miami is a tremendous university with great academics and great athletics,” Whipple said. “It has been one of the most successful football programs in the country winning five national championships. So many players have gone on to the NFL. I haven’t worked with too many of them, but the thing I always admired about them is how much pride and respect they have for the school.”

“On behalf of the Philadelphia Eagles, I wish Mark and his family all the best in Miami and thank him for all of his contributions to the Eagles during this past year. He is an excellent football coach and has proven that on both the college and pro levels. He has a great opportunity in Miami and I’m sure he’ll be very successful with that program. He is a great addition to the University of Miami and will help them continue their high standard of football and academics.”

“Whip is a great coach and is the perfect fit for any coaching position at any school or team.  I know he will do great things at Miami and help that program tremendously.  He will help the players not just as a coach, but as a leader and a mentor to them.  I have nothing but the upmost respect for Whip and what he stands for.”

“Mark Whipple was without a doubt instrumental in the development of Ben Roethlisberger. He has a wealth of experience on the offensive side and is a great teacher and leader of young men.”