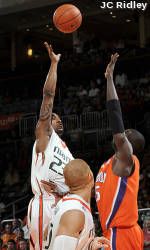 CORAL GABLES, Fla. (AP) – James Dews scored a game-high 16 points to lead four Hurricanes in double-figures as Miami shook off an early challenge from winless North Carolina Central for a 76-42 victory on Saturday at the BankUnited Center.

Down by six at halftime, N.C. Central cut Miami’s lead to 31-29 after Vincent Davis scored a basket just 2:50 minutes into the second half.

But Miami followed with 11 unanswered points — including a pair of Dews 3-pointers — and would go on to outscore the Eagles 30-9 over 11 minutes to break the game open with the 64-38 advantage.

Miami also dominated the glass, building the 53-34 rebounding advantage, including 10 boards from Cyrus McGowan in his second-straight double-figure rebounding performance.

The Hurricanes close their 2008-09 non-conference schedule at home on Monday versus Florida Atlantic at 7 p.m. The game will also be broadcast on FSN-FL.