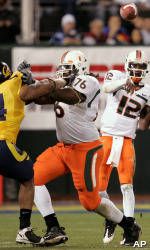 Jahvid Best rushed for a bowl-record 186 yards and two touchdowns, yet the Golden Bears (9-4) still needed a big defensive play and an unlikely hero to hold off the Hurricanes (7-6) in front of a Bay Area crowd teeming with screaming Cal fans.

Harris played well in the freshman’s second career start, going 25-of-41 for 194 yards and two TDs. Harris had won 31 straight starts dating back to his high school career in South Florida, but his fumble cost the Hurricanes in their first bowl game under coach Randy Shannon.

Nate Longshore shook off a dismal 10-for-21 performance in his final college game with that sharp scoring pass to Miller for Cal. The Golden Bears won for the fifth time in a school-record six consecutive bowl appearances under coach Jeff Tedford.

Laron Byrd and Thearon Collier caught Harris’ scoring passes for Miami, which tied it on Matt Bosher’s 22-yard field goal with 9:13 to play.

After Cal’s Giorgio Tavecchio missed a 34-yard field goal with 4:24 left, Follett knocked the ball away from Harris while dropping the quarterback from behind on third down. Cameron Jordan recovered and returned it to the Miami 2, where Longshore connected with Miller, a freshman who hardly played this season.

Tedford chose Longshore, the oft-booed senior, to start his final college game instead of Kevin Riley, the Bears’ starter for most of this year and the hero of last season’s comeback victory in the Armed Forces Bowl. If Riley is injured, the Bears didn’t acknowledge it – and Longshore struggled all the way until his final throw.

Marve was among five Miami players suspended in the days leading up to the game for violating team rules, and starting tight end Dedrick Epps was a last-minute scratch from the lineup with a bruised leg. Graig Cooper rushed for 63 yards and Lee Chambers added 60 for Miami, and tight end Craig Zellner made eight catches for 48 yards in Epps’ place.

Bay Area fans clad in blue and gold filled all but a few thousand spots in the sold-out stadium, turning the San Francisco Giants’ waterfront ballpark into a cross-Bay rendition of Strawberry Canyon with a bowl-record crowd of 42,268. The Bears’ campus is roughly 12 miles from San Francisco, yet the team stayed in a hotel in the city during its week of preparation, crossing the Bay Bridge for daily practice in Berkeley.

Best finished the season with 1,580 yards rushing, which means Oregon State freshman Jacquizz Rodgers would need 328 yards in the Sun Bowl against Pittsburgh on Wednesday to overtake Best for the Pac-10 rushing title. Best, who finished with the second-highest rushing total in Cal history, all but locked up his first conference rushing crown with 311 yards in the Bears’ regular season finale against Washington.

Longshore started two of Cal’s four regular-season losses and was far less effective overall, but Riley wasn’t sharp enough to win over Tedford, who then promoted Longshore for the Emerald Bowl after a few good practices.

Verran Tucker, the junior receiver who surprisingly claimed a starting spot for Cal this season, took a short slant pass 74 yards to the Miami 2 midway through the first quarter, setting up Best’s 1-yard TD run. The pass was the longest ever allowed by Miami in its lengthy bowl history.

A few minutes later, Best doubled back on an interior run and sprinted past the Hurricanes’ fleet-footed defense for a 42-yard score. But Harris replied with a scoring drive culminating in Byrd’s TD catch.

Harris led a 10-play, 69-yard drive after halftime culminating in Collier’s short TD catch to tie it at 14.