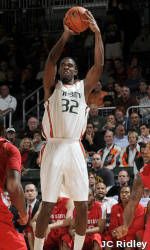 NEW YORK, N.Y… – The Hurricanes hit the road for the holidays, traveling to New York City to take on former Big East-rival St. John’s in Madison Square Garden on Sat., Dec. 27, in a game to be televised on ESPNU.

Miami is 3-1 away from home in 2008-09, including a 1-0 mark on its opponents’ home court after a 73-67 victory at Kentucky on Dec. 6 in front of 24,109 Wildcat faithful. That win marked the program’s first at Rupp Arena, as fifth-year Miami head coach Frank Haith added to his victories on some of the most challenging courts — including at North Carolina, Florida and now Kentucky.

Senior guard Jack McClinton has been selected as a candidate for the 2008-09 Lowe’s Senior CLASS Award. McClinton is among 30 senior men’s basketball players from around the nation – and four from the ACC – chosen as a candidate for the award, which is presented annually to an NCAA Division I student-athlete in nine sports. Based on criteria focusing on classroom, character, community and competition, the award winner will be selected by national balloting of head basketball coaches, national media and college basketball fans. A national media committee will select 10 finalists from the initial list of 30 in February 2009. Those 10 finalists will be placed on the official ballot for nationwide vote, with the winner being announced during the weekend of the NCAA Men’s Final Four.

McClinton, who has also been named a Wooden Award and Bob Cousy Award candidate this season, is the first Hurricane men’s basketball player named as a candidate for the Lowe’s Senior CLASS Award. He leads the Hurricanes in scoring for the third-straight season with 17.0 points per game – including a team-high 2.7 assists and 2.3 three-pointers an outing. Miami’s first All-ACC First Team selection in 2007-08, he was also the only First Team pick named to the All-ACC Academic Team.

Miami’s strength of schedule is ranked No. 2 in the country and its RPI is No. 27.

Jack McClinton  is averaging 22.0 points, 4.5 rebounds and 4.0 assists per game over his last two appearances, shooting .519 from the field. Dwayne Collins and James Dews are also averaging double-figure points over their two outings, with Collins posting 10.5 points per game at a .667 clip and Dews contributing 10.0 points per game — including converting 5-of-6 from the charity stripe.

A LOOK AT THE LOSSES

Among active players in the ACC, McClinton ranks fifth overall with 1,255 career points. However, the transfer is the top scoring ACC player among those with only two full ACC seasons on their resumes.

Dwayne Collins ranks fourth among active players in the ACC with 507 career rebounds.