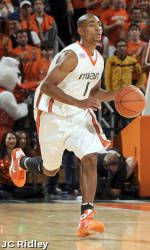 Dwayne Collins and James Dews scored 11 apiece, and Lance Hurdle chipped in 10 for the Hurricanes (7-2) as four Hurricanes scored in double figures for the fourth time this season. McClinton also grabbed a career- and game-high nine rebounds and he posted his third game of the season and 24th of his career with 20-plus points.

Miami responded with seven unanswered points in the next 3:33 and withstood the Robert Morris comeback. Jimmy Graham‘s dunk with 2:31 left capped the run and gave the Hurricanes a 64-55 lead.

Langhurst and Gary Wallace each scored 13 points for Robert Morris.