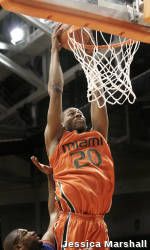 LEXINGTON, KY – The No. 21/22 University of Miami men’s basketball team returns to the hardwood on Saturday, Dec. 6, with a tough road test at Kentucky, winners of five straight. ESPN will televise the 5:30 p.m. game.

ON THE ROAD AGAIN
The University of Miami men’s basketball team will play their fourth game of the 2008-09 campaign away from home on Saturday, Dec. 6 — yet their first on an opponent’s home court. The Hurricanes travel to historic Rupp Arena for a 5:30 p.m., ESPN-televised match versus the Wildcats of Kentucky.

THE SERIES
Saturday marks the fourth meeting between the Hurricanes and Wildcats, with Kentucky holding the 3-0 all-time series advantage. These programs last met on Jan. 29, 2000, in Miami, Fla., resulting in a 60-57 victory for the then-No. 16 Wildcats. That game featured five players that would go on to NBA careers — John Salmons and James Jones of Miami and Tayshaun Prince, Jamaal Magloire and Keith Bogans of Kentucky.

Jack McClinton converted 4-of-4 three-point attempts versus Ohio State for a 1.000 three-point field goal percentage to tie the single-game school record. A Hurricane has now shot perfectly from beyond the arc (minimum of four attempts) eight times.

ON THE DOUBLE
Cyrus McGowan posted his first career double-double versus Ohio State, finishing with 10 points and 12 rebounds. He is among three Hurricanes to have posted a double-double in six games this season, while Miami is among four ACC teams to have a league-best three separate players post a double-double this season (North Carolina, Wake Forest, Georgia Tech).

Over his last two games, McGowan is averaging 12.0 points and 10.0 rebounds per game.

ROAD WARRIORS
In 2008-09, the Hurricanes will play at some of the most historic venues in college basketball — Rupp Arena (Dec. 6 vs. Kentucky), Madison Square Garden (Dec. 27 vs. St. John’s), the Dean E. Smith Center (Jan. 17 vs. North Carolina) and Cameron Indoor Stadium (Feb. 7 vs. Duke).

HITTING THE BOARDS
The Hurricanes have out-rebounded their last three opponents by an average of 10.3 rebounds per game, including a +15.0 rebounding margin in Tuesday’s effort versus Ohio State. Dwayne Collins leads Miami on the glass with 10.2 rebounds per game — which ranks third best in the ACC.

Collins is among six ACC players to have grabbed 15-or-more boards in a game in 2008-09, with a season-high 16 rebounds in the season-opening win over Florida Southern.

SCOUTING THE WILDCATS
After opening the season with a pair of losses, the Kentucky men’s basketball team has bounced back to win five straight – including claiming the Las Vegas Invitational championship with wins over Kansas State and West Virginia. The NCAA’s all-time leader with 1,971 wins, the 2008-09 edition of the Wildcats is led by a pair of players averaging double-figure scoring – reigning SEC Player of the Week junior guard Jodie Meeks (24.6 ppg) and sophomore center Patrick Patterson (17.7 ppg, 8.1 rpg), who scored a career-high 31 points in Wednesday’s 103-61 home win over Lamar.

Kentucky’s starting lineup is in question, as usual starters Ramon Harris and Michael Porter are listed as day-to-day after a collision in Wednesday’s game.