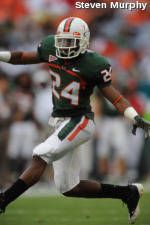 MIAMI (AP) – Robert Marve had a 1-yard touchdown run to put Miami ahead for good, Matt Bosher kicked three field goals, and the Hurricanes’ defense stiffened considerably in the second half on the way to beating Wake Forest 16-10 on Saturday.

Marve completed 11 of 20 passes for 153 yards and set up the go-ahead score in the third quarter with a 43-yard rush, helping Miami (5-3, 2-2 Atlantic Coast Conference) win consecutive league games for the first time since October 2006.

Marve then hit Thearon Collier with a perfect 25-yard pass on third-and-10 with 3 minutes left, getting Miami to midfield and allowing the Hurricanes to run out the clock.

Josh Adams had 21 carries for 111 yards for Wake Forest (4-3, 2-2), which marched 66 yards for a touchdown on the game’s first drive, but didn’t find the end zone the rest of the day. The Demon Deacons rushed a season-high 52 times for 195 yards, but quarterback Riley Skinner was only 3-for-8 for 57 yards.

Bosher’s field goals were from 36, 52 and 43 yards for Miami, which matched last season’s win total with four games remaining. Miami has won three straight overall, and extended its streak on a day where the 1983 national title team – the school’s first of five championship clubs – was honored at halftime.

The Hurricanes avoided disaster in the closing minutes.

Bosher shanked a punt for only 15 yards, giving Wake Forest the ball at the Miami 46 with 4:24 left, but the Hurricanes’ defense forced a quick three-and-out. Marve came back into the game with 3:13 left, found Collier with the big strike, and Wake Forest ran out of time outs from there.

The Demon Deacons rushed the ball on all 10 plays in a 66-yard, up-the-gut drive to open the game, capped by Mike Rinfrette’s 1-yard touchdown.

Nothing about Miami’s defensive front dissuaded Wake Forest from pounding away: The Demon Deacons ran the ball on each of their first 22 plays. Before Saturday, Wake hadn’t had more than six consecutive run calls at any point this season. And by halftime, Wake Forest was up to 32 carries, only five shy of its per-game average.

But after the initial drive, Miami chipped away, getting a field goal from Bosher to cut the lead to 7-3, then the 52-yarder from Bosher on the first series of the second half – after Sam Shields took a handoff on the kick return and got the ball into Wake Forest territory – to come within 10-6.

A three-and-out by Wake followed, and Marve put together a seven-play, 65-yard drive to give Miami the lead for good.