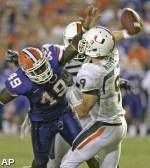 GAINESVILLE, Fla. (AP) – Tebow was good early and even better late, throwing two touchdown passes and helping the fifth-ranked Gators snap a six-game losing streak against Miami with a 26-3 victory Saturday night at The Swamp.

It was Florida’s first win since 1985 in the on-again, off-again series.

Florida’s defense was stout all night, holding the Hurricanes to 140 total yards.

So did Tebow. The Hurricanes pressured the junior with every snap, forcing him to scramble and make early, sometimes off-balance throws.

“We can do much more with him and we will,” Meyer said.

Robert Marve, making his first career start for Miami, was 10-of-18 passing for 69 yards and was sacked three times.

“We can build a lot of things off this game,” Miami coach Randy Shannon said. “That’s the one thing that we’re excited about. They see where we can get better, and they also know we were able to play with a top-five team in this country and we had a shot.

“That’s all you want is a shot, a chance on the road, hostile environment and we had that opportunity. But we have to capitalize on it next time.”

Florida, whose two scores in the first half came off Miami miscues on special teams, led 9-3 to start the fourth quarter. But Tebow, Harvin & Co. finally found their rhythm, putting together consecutive drives of 86 and 95 yards to put the game away.

The Gators, who finished with 345 total yards, took advantage of two favorable calls to score the first of the two late touchdowns. Tebow hooked up with Carl Moore for a 28-yard gain on third-and-9, putting the Gators at the 5-yard line. Moore was initially ruled out of bounds, but officials reviewed the play and said Moore’s elbow touched down before his feet landed out of bounds.

“That was the play of the day,” said Meyer, adding that Moore sustained a hip-pointer on the catch. “That kind of changed momentum.”

Three plays later, on another third down, Miami’s Randy Phillips was flagged for pass interference against Harvin. It gave the Gators a first-and-goal at the 2. Harvin took a pitch from Tebow on third down and outran several defenders for the score.

Phillips insisted the pass to Harvin was not catchable and should not have been flagged.

“No way,” he said. “But the ref made the call, so that’s what we’ve got to live with. Chalk it up, play some more, bounce back.”

Florida’s next drive was the most impressive of the night, a five-play, 95-yarder that sealed the victory. Tebow found Louis Murphy – yes, the guy who spouted off about Florida being better suited than Miami to be referred to as “The U” – in the corner of the end zone for a 19-yard strike.

Jonathan Phillips added a 29-yard field goal with 25 seconds to play for the final score.

The teams likely won’t play again until 2013 in Miami.

Former Florida coach Steve Spurrier wanted to add Miami back to the schedule in 1990, hoping to bolster recruiting efforts in talent-rich Dade County. But with the Southeastern Conference expanding, there was no room.

After a 13-year hiatus, Florida and Miami renewed the rivalry in the 2001 Sugar Bowl and have played a few times since.

But the Gators kept ending up on the losing end.

“I’m glad I don’t have to hear about it (anymore), that’s for sure,” Tebow said.

Florida might not have even scored in the first half had Miami not made two errors on special teams.

Matt Bosher shanked a punt on the team’s opening drive, a 14-yard kick that gave the Gators great field possession. Tebow made easy work of the short field, directing a 35-yard drive on five plays and giving Florida a 7-0 lead with a 14-yard touchdown pass to Hernandez.

Miami then sucked the energy out of Florida Field – most of the record 90,833 in attendance were clad in orange and blue – with a 16-play drive that took 8:42 off the clock and kept Tebow on the sideline. It ended with a field goal, but gave the Hurricanes plenty of confidence they could play with the Mighty Gators.

Nonetheless, the Gators added to their lead with another special teams blunder. Miami left Jeff Demps, one of the fastest players on the field, to rush unblocked at Bosher. Demps blocked the punt, and Murphy nearly recovered for a touchdown, but couldn’t hang and the ball trickled out of bounds for a safety and a 9-3 advantage.

“The ball didn’t fall our way,” Marve said. “We had some plays we left out there on the field. The offense, the numbers might not look great, but we did move the ball. Then we’d get stuck.”