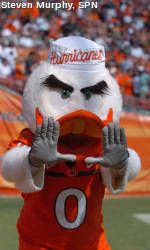 UM Football Excelling in the Classroom

CORAL GABLES, Fla. – As the University of Miami football team continues its preparation for the 2008 season on the practice fields, the same student-athletes are getting ready for another semester in the classroom, a place where the Hurricanes have thrived in recent years.

“We are in a profession that keeps score, and no score is more important than our graduation success rate,” Director of Athletics Kirby Hocutt said. “The University of Miami is synonymous with champions and the young people in our program today are focused on becoming champions both in the classroom and in competition. I commend the young people currently in our program today and those in the past for their dedication and commitment to academic excellence.”

This past spring, the NCAA released its annual Academic Progress Report (APR), with the Hurricane football team scoring a 969, the eighth-highest mark out of the 119 Bowl Sub-division football programs. Miami’s score – also the third-highest mark in the 12-team Atlantic Coast Conference – puts the team in the 80th-90th percentile nationally based on its performance in the classroom.

Miami’s APR score in 2008 was a slight improvement over its mark of 966 in 2007 when the team was ranked 10th nationally in academic success.

Of the 23 seniors on this year’s squad, 13 have already earned degrees, while the remaining 10 are all on course to graduate either in December of 2008 or May of 2009.

Miami’s fall semester begins Wednesday, Aug. 27, one day before the Hurricanes open the season against Charleston Southern at 7:30 p.m. at Dolphin Stadium.

2008 APR Rankings Among All D-I Football Programs in Florida