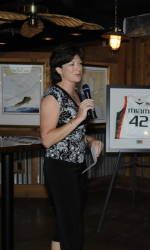 Emceed by Alex Kushel, the evening included video highlights of the team, as well as both seniors Maurita Reid and Carla Williams, the recognition of the coaching and support staff and the loyal supporters of the women’s basketball program.

Junior LaToya Cunningham was presented with the most awards after being selected as the Team Captain, Strongest Player, Assists Leader and the Coaches Award.  Reid came away with three awards including the team’s Most Valuable Player.