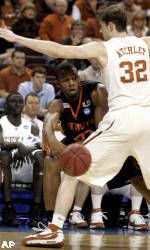 A.J. Abrams made two free throws with 9.5 seconds remaining, giving the second-seeded Longhorns just enough margin to hold off seventh-seeded Miami 75-72 in the second round of the South Regional on Sunday. Texas led by as many as 17 and was ahead 66-50 with 4:15 remaining before a dramatic rally by the Hurricanes.

“We won so I’m really not sweating it anymore,” said the Longhorns’ Damion James, who missed a pair of free throws in the final half-minute. “Just go back to practice and shoot free throws and hope to get better.”

Texas (30-6) led 74-69 after Abrams’ final free throws, but the Longhorns weren’t quite safe yet. Miami’s Raymond Hicks made consecutive 3-pointers, and D.J. Augustin then shot an air ball on his first of two free throws with 1.8 seconds to play.

“I shot it a little short,” Augustin said.

The timing couldn’t have been worse. Arkansas fans, putting it mildly, do not care for Texas. They’d booed the Longhorns before each of their two games at Alltel Arena, but had to quiet down as Texas played beautifully against Austin Peay in the first round and then for most of the Miami game.

In the final minutes Sunday, it was loud again.

“Everyone was against us, it seemed,” James said.

Augustin made his second free throw at the end, and Miami’s long pass was broken up. Texas advances to the regional semifinals to play third-seeded Stanford on Friday.

That game will be in Houston in what will surely be a more friendly environment.

Abrams scored 26 points on six 3-pointers for the second consecutive game. The Longhorns went 13-of-26 from 3-point range, including 9-for-16 in the first half. They nearly made up for that by going 12-of-21 on free throws.

“Thankful we won the game,” Abrams said. “We did not finish like we wanted to in the last couple of minutes.”

James added 16 points and 16 rebounds for the Longhorns, and Augustin contributed 12 points and eight assists.

Miami coach Frank Haith was an assistant at Texas for three years under Rick Barnes before taking over the Hurricanes in 2004. He and Barnes shared a hug and chatted briefly near the Miami bench about 15 minutes before the opening tip. Barnes has Texas in the round of 16 for the fifth time in seven years, and the Longhorns have tied the school record for wins set two seasons ago.

But it didn’t come easy.

“Let’s give Miami a lot of credit for a lot of heart, a lot of grit, a lot of determination, the way they fought,” Barnes said. “I knew that would happen because you all know my relationship with Frank and I know what he’s all about and his team.”

Haith recruited Abrams while at Texas – and paid a price for that Sunday. Abrams finished the first half with 14 points on 4-of-7 shooting from 3-point range.

“He’s got a tremendous motor,” Haith said. “He keeps working, and he’s got a great release.”

Abrams’ second 3-pointer gave Texas an early 19-8 lead. For much of the first half, he set up on offense near the left sideline, right in front of Haith and the Miami bench.

Less than nine minutes in, five different Texas players had made 3s, every Longhorn that had played except 6-foot-10, 299-pound Dexter Pittman. Texas led by as many as 14 in the first half and was ahead 43-32 at intermission. Abrams scored his team’s final eight points of the half.

“All five guys can shoot 3s,” Haith said. “That’s hard to guard when they’re making them.”

Jack McClinton scored 18 points for Miami after a 38-point effort in the first round against Saint Mary’s. McClinton made a 3-pointer late in the second half to cut the lead to 10, then dove to knock a pass off a Texas player out of bounds with 2:22 to play.

McClinton sank a couple free throws to make it 68-60, the first time all half Miami was within single digits. He then made two more from the line after drawing a foul driving to the basket. Down six, Miami (23-11) had the ball, but Lance Hurdle tossed up a wild shot and Texas’ Connor Atchley ended up with the ball.

Still, the Longhorns couldn’t put the game away from the free throw line. A 3-pointer by Hicks with 11.9 seconds to play made it 72-69, but Texas was able to get the ball to Abrams, who made all six of his free throw attempts.

Miami fell a win short of equaling its school record for a season. The Hurricanes went 12-20 in 2006-07 but bounced back this season, reaching the second round of the NCAA tournament for only the third time.

Texas fell in the second round a year ago, then lost star Kevin Durant to the NBA.