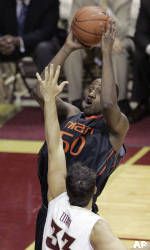 MIAMI AT THE NCAA TOURNAMENT

BEEN THERE, DONE THAT

Although it marks a debut for Miami head coach Frank Haith‘s Hurricanes in the NCAA Tournament, he has previously advanced as an associate head coach or assistant coach five times (with Texas, Wake Forest and Penn State) — including three appearances in the Sweet Sixteen, one appearance in the Elite Eight and one trip to the Final Four.

James Dews has not missed a free throw since Jan. 23, making 26 straight — including an 8-of-8 effort in ACC Tournament play. Jack McClinton has made 23 straight free throws, dating back to Miami’s March 1 win over Virginia, and went 9-of-9 from the line during the ACC Tournament. McClinton and Lance Hurdle, who rank among the ACC’s top three and the nation’s top 30 (McClinton is sixth in the NCAA) in free throw shooting, combined to convert 17-of-17 free throws versus Boston College (3/5) and 8-of-8 at Florida State (3/8). McClinton and Dews went 12-of-12 from the charity stripe in the ACC opening-round win over NC State. For the season, McClinton is shooting an ACC- and school-record .908, while Dews and Hurdle convert at a .907 and .864 clip, respectively. Miami shot a season-high .917 from the line (22-24) in the Feb. 23 win over Maryland.

With an appearance in the NCAA Tournament, fifth-year senior Anthony King will break the school record for most appearances by a Hurricane with 125. King made his 103rd straight start in the ACC Tournament quarterfinal versus Virginia Tech.

Miami leads the all-time series with St. Mary’s, 4-0, with all four previous meetings occurring between 1963-1969. Former Hurricane great Rick Barry — the only player in basketball history to win single-season scoring titles in the NCAA, ABA and NBA — starred in the first two of those contests, scoring 34 points for the Hurricanes in the inaugural meeting on Dec. 12, 1963 and then scoring 39 points and grabbing 18 rebounds in the second win on Dec. 15, 1964.

The Jackson Five made their first televised appearance on the Ed Sullivan Show the Sunday prior to the last time Miami and St. Mary’s met… Steam’s “Na Na Hey Hey Kiss Him Goodbye” was No. 1 on the Billboard chart the week of the game… Other December events: The first draft lottery in the United States since World War II was held for the Vietnam War on Dec. 1… The Boeing 747 jumbo jet made its debut on Dec. 2… Notable events from earlier in 1969: January 20: Richard M. Nixon is inaugurated 37th President of the United States… January 30: The Beatles give their last public performance on the roof of Apple Records in London… July 20: Buzz Aldrin and Neil Armstrong become first humans to walk on the moon… August 15-18: Woodstock is held… Median Household Income (current dollars) — $8,389… Cost of a gallon of gas — $.35… Average cost of a new home — $27,900.

A LOOK AT ST. MARY‘S

St. Mary’s advances to the NCAA Tournament for the fifth time in school history and for the first time since 2005. The Gaels are 1-4 in the tourney, with its lone win to date coming in 1959. St. Mary’s tied a school record with 25 overall wins and 12 West Coast Conference victories in 2007-08 — good for a second-place finish. The Gaels are guided by co-WCC Coach of the Year Randy Bennett, while Diamon Simpson and Patrick Mills earned All-WCC First Team recognition and Omar Samhan was named honorable mention. Mills, the WCC Newcomer of the Year, leads the Gaels with 14.5 points and 3.4 rebounds per game, while Simpson, the WCC Defensive Player of the Year, adds 13.6 points, 9.5 boards and 1.8 blocks an outing. Samhan contributes 10.6 points, 7.3 rebounds and 1.4 blocks per game.