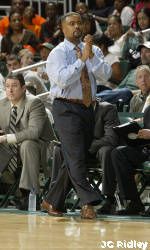 The Hurricanes are going to the Big Dance! The seventh-seeded University of Miami men’s basketball team will open NCAA Tournament play versus 10th-seeded St. Mary’s on Friday at Alltel Arena in North Little Rock, Ark., at 11:30 a.m. (CT).

The winner advances to Sunday’s second round to face the winner of the No. 2 Texas/No. 15 Austin Peay game.

It marks the 14th postseason appearance for the Hurricanes and the sixth trip to the NCAA Tournament. It is the third postseason appearance for Miami under fourth-year head coach Frank Haith, whose squad put together a 10-game turnaround from last season to head into the Big Dance with a 22-10 record and a program-best fifth-place finish in the ACC, the nation’s top-ranked conference.

Although it marks a debut for Haith’s Hurricanes in the NCAA Tournament, he has previously advanced as an associate head coach or assistant coach five times — including three appearances in the Sweet Sixteen, one appearance in the Elite Eight and one trip to the Final Four.

Tenth-seeded St. Mary’s finished the regular season with a 25-6 overall record and 12-2 mark in West Coast Conference play. The Gaels are making their second trip to the NCAA Tournament in four years, and are led by Patrick Mills — the WCC’s Newcomer of the Year — with 14.5 points and 3.4 assists per game. St. Mary’s has dropped three of their last five games, including falling to eventual conference champs San Diego in double-overtime in the WCC Tournament semifinals, but is 4-0 on neutral courts this season.