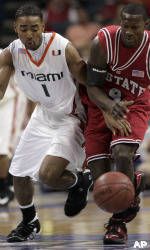 Lance Hurdle added 13 points, six rebounds and five assists for the fifth-seeded Hurricanes (22-9), who advanced to Friday’s quarterfinals to face fourth-seeded Virginia Tech as they continue to chase an NCAA tournament berth.

J.J. Hickson had 27 points and 14 rebounds for the 12th-seeded Wolfpack (15-16), who turned in an offensive performance befitting its last-place ACC finish in a miserable season. Picked to finish third in the league, N.C. State shot just 34 percent, including 2-for-15 from 3-point range, and relied entirely on its star freshman to make every play.

Miami didn’t do all that much offensively, either. The Hurricanes shot 37 percent and 1-for-9 from 3-point range, while first-team all-conference performer Jack McClinton finished with eight points – nine below his season average.

Still, the Hurricanes led almost the entire way and pushed the margin to as many as 17 points in the second half. Then, after the Wolfpack managed a meager run to threaten to cut the deficit to single digits, McClinton came up with his only two field goals, keeping Miami comfortably in front.

It offered some relief for Miami after a painful 79-77 overtime loss at N.C. State in January. In that game, Gavin Grant stole an inbounds pass right under the basket and scored with 2.1 seconds left.

There would be no repeat of the Wolfpack’s thrilling run to last year’s ACC title game, which began with a first-round win against Duke. The only similarity this time was that coach Sidney Lowe again wore his bright red blazer, though it clearly didn’t have the same kind of magic this time.

While Hickson hit 8 of 14 shots, the rest of the Wolfpack managed a combined 8-for-33 shooting – including a 5-for-22 effort in the first half as Miami took a 24-17 lead at the break. Courtney Fells was the team’s second-leading scorer with just six points.

Things got so bad at that freshman point guard Javi Gonzalez kicked a loose ball over the scorer’s table and about five rows into the stands after the Wolfpack – desperately trying for a steal near midcourt – was called for a foul with Miami leading 52-38 with 3:29 left.

Miami will face Virginia Tech in Friday’s quarterfinals at 2:30 p.m. The game is being carried by Raycom Sports and ESPN2. The winner will take on the Florida State/North Carolina victor in Saturday’s semifinals.