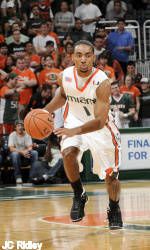 CORAL GABLES, FLA. – The <?xml:namespace prefix=”st1″ ns=”urn:schemas-microsoft-com:office:smarttags”?>University of Miami men’s basketball team has won six of their last seven games and rides a two-game win streak into Saturday’s season finale at FloridaState. Bouncing back from a disappointing 2-6 start in ACC play, the Hurricanes have gone 6-1 over the second half of the ACC season, reaching a program-record eight ACC wins with Wednesday’s victory over BostonCollege.  <?xml:namespace prefix=”o” ns=”urn:schemas-microsoft-com:office:office”?>

With a 21-8 record and an 8-7 mark in ACC play, the Hurricanes are battling for a berth in the NCAA Tournament. Since 1985 when the tournament field expanded to 64 teams, no team has won 20 games and finished at least .500 in ACC play and not earned an invitation to the big dance.

TALK ABOUT A TURNAROUND

With a 10.5 game swing from last season, Frank Haith‘s Hurricanes have put together one of the largest turnarounds in NCAA Divison I basketball this season. After an injury-plagued squad struggled to a 12-20 record in 2006-07, this edition of the Hurricanes is 21-8 and enters the final game of the regular season in fifth place in the ACC with program-best 8-7 mark.

A win over FSU on Saturday would assure the Hurricanes of a No. 4 seed in next week’s ACC Tournament — granting them a first-round bye. All this from a team that was picked 12th in the ACC in preseason media poll.

Miami snapped a 13-game skid to BostonCollege with Wednesday’s 74-61 victory over the Eagles. The frustrating streak, which dated back two head coaches to the 2000-01 season, included play in both the Big East and ACC. With the win over BC, Frank Haith’s Hurricanes have defeated every ACC team at least once in league play.

Wednesday’s win over BostonCollege snapped a 13-game skid versus the Eagles and moved the Hurricanes to a program-best 8-7 in ACC play… Miami’s 14-2 record at home this season trails just Duke for home court dominance in the ACC… With four three-pointers versus BC, Jack McClinton moved into Miami’s top five for career treys with 171 in just his second season as a Hurricane. He is just three shy of fourth place, currently held by Guillermo Diaz… Jack McClinton and Lance Hurdle — who rank among the ACC’s top five in free throw shooting — converted 17-of-17 free throws versus the Eagles. James Dews did not get to the charity stripe versus BostonCollege, but has not missed a free throw since Jan. 23… Miami’s 11-point second-half deficit to BostonCollege is the largest the Hurricanes have overcome for a victory this season… Miami’s 20 points at the half versus BC is the second-lowest first half scoring performance of the season. The Hurricanes managed only 18 points in the first half versus Providence in the Puerto Rico Tipoff Championship game — however Miami put together strong second-half efforts in both instances and was victorious in the two games. In addition, the Hurricanes have battled back from halftime deficits to win five games this season.

Saturday marks the 60th meeting between Miami and FloridaState, with the Seminoles holding the 32-27 all-time series lead. FSU ranks among the top five most-frequently faced opponents in Miami history. The Seminoles have won four straight over the Hurricanes, including a 62-55 decision in Coral Gables on Feb. 6.

Toney Douglas scored 28 points to lead FloridaState past Miami, 62-55, in just the second home loss for the Hurricanes. Jason Rich added 14 points and Uche Echefu scored 10 for the Seminoles (14-10, 3-6 ACC), who used an 11-0 second-half run to take the lead for good.

The Hurricanes and Seminoles struggled with early shooting woes. The score was 2-2 during the first 5:35, and Miami didn’t manage a field goal until Brian Asbury connected 6:25 after tip-off.

But Douglas gave FloridaState a spark, scoring 11 points in the final 4:51 of the first half, including his third 3-pointer with one second remaining to give FSU a 30-25 edge heading into intermission. He also keyed the second-half spurt by the Seminoles, who trailed 37-34 before the 11-0 run that was capped by his fifth 3-pointer with 9:44 remaining.

Florida State has won three of its last four games and looks to rebound from Tuesday’s 90-77 loss at top-ranked North Carolina. The Seminoles have five players averaging double-figure scoring, led by Toney Douglas with 15.8 points per game. He has scored in double figures in 32 straight games, including an 11-point outing at UNC and a 28-point performance versus Miami earlier this season, and averages 1.9 treys and 2.8 steals per game. Jason Rich, who had a team-high 28 points at UNC, adds 14.1 points an outing, while Uche Echefu contributes 10.4 points and a team-best 7.1 rebounds per game — and is averaging 13.0 points and 6.4 boards over the last two.