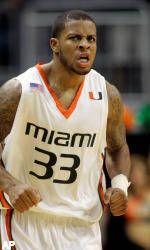 CORAL GABLES, Fla. (AP) –Jack McClinton scored a career-high 34 points to lead Miami to a 95-93 win over Virginia on Saturday. The victory gave the Hurricanes (20-8, 7-7 ACC) their 20th win of the season for just the 10th time in school history and their seventh ACC win for the third time in four seasons as league members.

McClinton hit a career-high seven 3-pointers in the Miami win — including five in the second half — to tie the UM mark for the third-most 3-pointers in a game.

3-pointer with 9.2 seconds left put the Hurricanes ahead 94-90. After Sean Singletary’s driving layup cut the deficit to 94-92, McClinton converted on one of two free throws with 3.3 left to give the Hurricanes a 95-92 lead.

Singletary hit the first of two free throws with 0.9 left, but Miami’s tipped away his deliberately missed second attempt. Singletary finished with a career-high 44 points for the Cavaliers (13-13, 3-10).

McClinton scored 14 straight points for Miami, including three 3-pointers, during a 2:27 stretch of the second half.

Jamil Tucker scored all 10 of his first-half points in the final 4:04 and Virginia entered the break up 39-35.