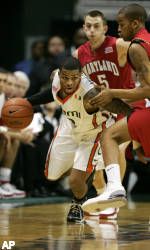 CORAL GABLES, Fla. (AP) – Anthony King scored 14 points and posted five blocks as Miami followed Wednesday’s victory over No. 5 Duke with a 78-63 win over Maryland on Saturday afternoon at the BankUnited Center.

Eric Hayes led Maryland (17-11, 7-6) with 14 points and Landon Milborne and Greivis Vasquez each finished with 13 points.

Miami has now defeated Maryland in five of their past six meetings, including three straight.

After the Hurricanes started the second half 39-36 with five unanswered points in the first 1:57, the Terrapins responded with an 8-0 run and tied it, 44-44. Milborne’s two open 3-pointers from the right wing keyed the run. But the Terrapins’ second-leading scorer James Gist, who averages 15.8 per game, committed his fourth foul with 15:44 remaining and was forced to sit the next 8:41.

Dews hit a jumper and scored on a fast-break layup as Miami scored five unanswered points during a two-minute run and helped Miami retake the lead 53-48 with 11:27 remaining in the second half.

King scored six points during a 10-0 Miami run early in the first half. McClinton’s jumper with 14:16 remaining capped the spurt, increasing the Hurricanes lead, 15-6. The Terrapins countered with a 9-3 spurt, behind Bambale Osby’s five points and Vasquez’s two field goals, and reduced Miami’s advantage 18-15 with 11:30 left in the half.

King’s short field goal with 5:52 remaining gave the Hurricanes their biggest lead of the half, 33-22. But the Terrapins outscored Miami 14-6 to close the half as Gist scored six points and Hayes hit two 3-pointers.