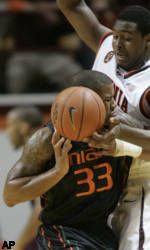 BLACKSBURG, Va. (AP) – Jack McClinton scored 15 of his 19 points in the second half Saturday and Miami ended a three-game skid with a 74-71 victory at Virginia Tech, the Hurricanes’ first road win in the Atlantic Coast Conference in more than a year.

The Hurricanes (16-7, 3-6 ACC) led throughout the second half by dominating the backboards, 35-20, and repelling every attempt by the Hokies to rally with six 3-pointers in the second half and clutch free-throw shooting. The victory was Miami’s first on the road in the ACC since it won 63-58 at Maryland on Jan. 10, 2007.

Trailing 65-55 with 2 minutes left, the Hokies scored six straight to whip the crowd up again, but McClinton hit both ends of a one-and-one to stretch it back to six.

A.D. Vassallo and Hank Thorns hit 3-pointers in the final minute for the Hokies, Thorns’ coming with 18 seconds left to make it 70-67, but James Dews was fouled hard with 15.1 seconds left, and Miami sent Eddie Rios in to shoot his two free throws.

He made them both, and the Hurricanes held on. Deron Washington did have a shot at the buzzer that came up short, but he was inside the 3-point line when he let it go.

Vassallo led the Hokies with 24 points, 19 in the second half, and Jeff Allen had 16, all but four coming in the first half, and seven rebounds. J.T. Thompson scored 10.

The loss was the second in a row for the Hokies, who have been the surprise team of the ACC and were starting a stretch that sees them play four of the next six at home.

It was just their second loss at home this season; Duke won here on Jan. 24.

The Hurricanes led 28-26 at halftime after outscoring the Hokies 18-10 over the final 11:06. The Hokies had seven turnovers during the run and was dominated on the glass as Miami had a 20-12 rebounding edge in the half, 9-3 on the offensive end.