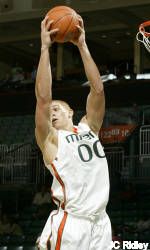 Jason Rich added 14 points and Uche Echefu scored 10 for the Seminoles (14-10, 3-6 Atlantic Coast Conference), which used an 11-0 second-half run to take the lead for good.

The Hurricanes and Seminoles struggled with early shooting woes. The score was 2-2 during the first 5:35, and Miami didn’t manage a field goal until Brian Asbury connected 6:25 after tip-off.

He scored 11 points in the final 4:51 of the first half, including his third 3-pointer with one second remaining to give Florida State a 30-25 edge heading into intermission.

And Douglas keyed the second-half spurt by the Seminoles, who trailed 37-34 before the 11-0 run that was capped by his fifth 3-pointer with 9:44 remaining.

The Seminoles played the second half without guard Isaiah Swann, who left the game with a left leg injury. The severity was not known.