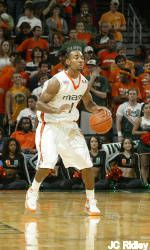 Men's Basketball Knocks Off St. John's to Improve to 7-0

CORAL GABLES, Fla. (AP) – Anthony King and Lance Hurdle each scored 13 points as the University of Miami men’s basketball team downed St. John’s, 66-47, at the BankUnited Center in a nationally-televised game on Sunday.

The Hurricanes remain undefeated, improving to 7-0 for the fourth time in school history, while the Red Storm dropped its first game of the season to fall to 4-1.

D.J. Kennedy’s 3-point play and Paris Horne’s field goal reduced Miami’s lead to 52-43 with 5:17 remaining. But James Dews converted four free throws for the Hurricanes, and Hurdle scored another pair of free throws in the next 1:12 as Miami secured the 19-point win.

Dews finished with 11 points for Miami, while Jack McClinton returned to the court to finish with eight points, including a pair of three-pointers, and three rebounds. Dwayne Collins posted eight points and six boards in the victory, while King added eight rebounds and a season-high three steals in his sixth-straight double-figure scoring performance.

The Hurricanes picked up 33 points — half of its offense — from the bench, as every Miami player that saw action in the game scored.

St. John’s, which overcame a 10-point deficit with a late run in the first half, took a 32-31 lead on Kennedy’s 3-pointer 1:54 into the second half. But the Hurricanes outscored the Red Storm 9-3 in the next 4:14 behind King’s two short jumpers and a free throw.

The Red Storm also rallied from a 10-point deficit with a 10-0 run in the final 4:04 of the first half. Burrell scored six points during the spurt, including a short jumper inside the lane with three seconds remaining that tied it at 29-all at the half.

The Hurricanes hit the road for a pair of games, including Saturday’s 7 p.m. tilt at crosstown-rival Florida International, before returning to the BankUnited Center to face Stetson on Mon., Dec. 17, at 9 p.m.