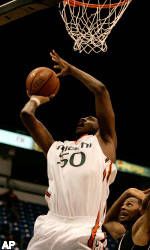 Hurricanes down VCU to Advance to Tip-Off Finals

SAN JUAN, Puerto Rico (AP) – Jack McClinton scored 23 points and Miami held off a late-game rally to lead the Hurricanes to a 69-63 win over Virginia Commonwealth in the second round of the O’Reilly Auto Parts Puerto Rico Tip-Off on Friday.

The Hurricanes (3-0) led 36-21 at the half and by as many as 13 points with four minutes to play. The Rams went on a 12-4 run, highlighted by eight points from Eric Maynor, to cut the lead to 63-58 with 26 seconds remaining. Raymond Hicks, McClinton and Lance Hurdle combined to sink all six free throw attempts in the final seconds to shut down the Rams.

Anthony King posted his first double-double of the season and the 11th of his career, finishing with 10 points, 15 rebounds and three blocks, while Brian Asbury added 10 points for the Hurricanes. McClinton nailed 5-of-7 three-pointers and went 6-of-6 from the charity stripe.

Miami will play the winner of Friday’s Providence vs. Arkansas matchup in Sunday’s championship game at 7:30 p.m. (EST) on ESPN2. The game will also be broadcast live on WKAT 1360AM.