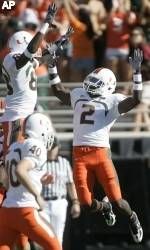 For the first time since 1977, the rivalry game that helped decide so many national titles during the 1980s and 90s was played with neither team ranked. Fittingly, the Seminoles and ‘Canes combined for nine turnovers, five by FSU.

Minutes before Miami’s two quick touchdowns, the Hurricanes (5-3, 2-2 Atlantic Coast Conference) appeared to have lost their best chance to get the win when Kirby Freeman was stopped for no gain on a fourth-and-1 at the Florida State 1 with 5:29 left and the ‘Canes trailing 29-24.

Xavier Lee, who was intercepted twice, then fumbled after being hit by Miami’s Teraz McCray, and McCarthy ran it in for the clincher.

Lee threw two interceptions and lost two fumbles for Florida State (4-3, 1-3). He completed 14 of 32 passes for 208 yards in his third start this season.

Cismesia’s fourth field goal, from 45 yards, gave Florida State a 26-24 lead late in the third quarter of the back-and-forth contest and he added another from the same distance early in the fourth quarter for the 29-24 lead.

The Hurricanes had grabbed a 24-23 lead on a trick play midway through the third quarter when place-kicker Francesco Zampogna took an over-the-shoulder toss from his holder and found tight end DajLeon Farr on a 26-yard scoring pass.

Toddrick Verdell’s 45-yard touchdown run was followed by a Cismesia field goal that put the Seminoles ahead 20-17 at halftime.

The Hurricanes went ahead 7-3 lead on Wright’s 1-yard run on a scoring drive highlighted by Wright’s 64-yard third down pass to Darnell Jenkins.

Greg Cooper then added a 2-yard TD run set up by a fumble by Florida State’s Smith.

Florida State coach Bobby Bowden, who has 370 career coaching wins, is now just one ahead of Penn State’s Joe Paterno.