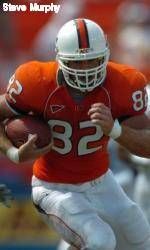 Coral Gables – The University of Miami is looking to have another strong showing at this weekend’s NFL Draft. The Hurricanes have eleven players eligible for the draft and experts are expecting UM to have at least one first-round pick in Greg Olsen. If so, Miami would extend its NCAA record to 13 consecutive years with a first-round selection.

Olsen is considered the best available tight end in the 2007 draft. Experts see him going in the middle of the first round. Former teammates Brandon Meriweather and Jon Beason have a chance of joining Olsen as early draft picks. Experts expect Meriweather and Beason to be selected in the first two rounds this weekend.

The current streak of 12 consecutive years with a first-rounder is the longest in NCAA history. The Florida Gators held the record previously with nine straight years in which the school had a player chosen in the first round from 1983-1991.