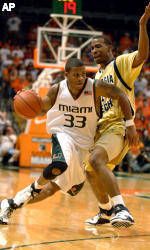 CORAL GABLES, Fla. (AP) – A lead was slipping away, three Miami players had already fouled out and another starter was on the bench with an injured wrist.

Jack McClinton finished with 22 points, Anthony Harris added 21 in his best game of the season, and the Miami guards each had four points in the final 63 seconds to help the Hurricanes beat No. 21 Georgia Tech 90-82 Sunday night in the both school’s Atlantic Coast Conference opener.

“That was a gutty win,” Miami coach Frank Haith said. “We had a lot of guys step up. We had a lot of adversity in that game. … We just found a way to piece it together.”

Dwayne Collins had dunks on consecutive possessions in the final minutes for the Hurricanes (5-3, 1-0), whose eight-point lead with 5:05 left was whittled to 77-75 when Lewis Clinch hit a pair of free throws less than 2 minutes later.

But Georgia Tech (6-2, 0-1) missed its next four shots from the field, Collins dunked on consecutive trips, and the Hurricanes held on to stay perfect (4-0) at home this season.

“When you score 82 points on the road and give up only 14 offensive rebounds to this team you’d probably come away with a win,” Georgia Tech coach Paul Hewitt said. “They shot the ball very well. I don’t think we guarded, especially off the dribble, particularly well. And we gave up 90 points, so we deserved to lose.”

Clinch scored 22 points for Georgia Tech, and Ra’Sean Dickey had 19 on 7-for-7 shooting. Javaris Crittenton also had 19 for the Yellow Jackets, 13 of them coming in the first half.

Brian Asbury had 16 points and Raymond Hicks added 11 before fouling out for Miami, which is 3-0 in conference home openers since joining the ACC.

“Someone asked me today ‘Do you like playing a league game this early?’ And my comment was, ‘I like it if we win,”‘ Haith said. “Because if you win, you’re in first place for about a month.”

The win capped a trying time for Haith, who missed practice Friday to attend the funeral for his 23-year-old nephew, Sean Bell. He was killed Nov. 25 – what would have been his wedding day – by a barrage of 50 police bullets as he left his bachelor party in New York.

“There was a lot going on this week with me personally,” Haith said. “I’m just proud that we were able to come together as a team. Being away Friday was tough and I think after I got back here, it was just a blessing that it was over, that I could move forward.”

There were eight lead changes in the first half, the last coming at the buzzer, when McClinton gave Miami a 39-37 lead. The Hurricanes never trailed again.

Crittenton lost control of the ball while driving for what would have been an easy score, and the Hurricanes scooped it up with about 7 seconds remaining. James Dews pushed it upcourt for Miami, then found McClinton on the right wing for a 3-pointer that swished through as the buzzer sounded.

“Pretty big,” Haith said. “Kind of a momentum swing there at the end of the half.”

McClinton was 10-for-10 from the foul line, 8-for-8 in the second half. Entering as the ACC’s leading scorer, the Siena transfer put on another show – probably to the chagrin of Hewitt. He coached Siena for three seasons, though it was long before McClinton’s year at the school in Loudonville, N.Y.

“Everybody out there was confident today and that’s what we have to do every single day,” McClinton said. “We’re not at Miami on scholarship for no reason. We all can play and put the ball in the hole.”

But the key for Miami was Harris – who entered averaging only seven points on 31 percent shooting.

“You’ve got to challenge yourself and take that as a challenge to be a good player,” Harris said. “That’s all I needed to do.”

McClinton scored only two points in the first 14:45, yet the Hurricanes and Yellow Jackets were tied at 27 at that point. Mouhammad Faye scored with 2:52 left to give Georgia Tech a 35-31 edge, but the Hurricanes went on a 13-4 run that ended when Harris hit a 3-pointer about 2 minutes into the second half.

The Hurricanes shot 56 percent in the game.

Miami played the second half without center Anthony King, who aggravated a wrist injury.