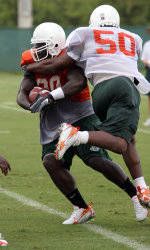 CORAL GABLES, Fla. – Mondays are usually the University of Miami football team’s day off. But recent events have been anything but usual and the team practiced Monday afternoon at the Greentree Practice Fields. The practice schedule was changed so that UM coaches and players will have Tuesday off to attend a funeral service for Bryan Pata, head coach Larry Coker said.

“We had a good practice today,” Coker said. “Guys were a little bit sore and beat up. We had seventy-three snaps on offense and only thirty-seven on defense (against Maryland). The defense is a little more rested. We need to fill our tanks back up and get ready to play our best on Saturday.”

The Hurricanes will take on Virginia on Saturday at Scott Field in Charlottesville.

“Virginia has a terrific quarterback and a big running back,” Coker said. “The quarterback can really make some things happen. He’s only a freshman, but he’s really good. Their defense is powerful and strong. They’re a good defensive football team.”

While football awaits on Saturday, the reality of a teammate’s death is with the Hurricanes every day. Coker was posed the question of how his players and staff have been able to separate the two.

“I don’t know that you do that,” Coker said. “While we’re out on the football field, it is football. The players have done a good job of that, trying to separate everything. At one o’clock tomorrow, it’s not going to be about football. Hopefully we can somehow try to separate as best we can and press on. Last week was a tough week and I don’t know that this week will be any easier, as far as the emotional part of it.”

Miami will return to the Greentree Practice Fields at 3:20 p.m. Wednesday.

Notes: Junior quarterback Kyle Wright did not work out with the team and visited a hand surgeon on Monday. “There is a definite possibility,” Coker said when asked if Wright’s thumb injury may require surgery. Wright’s availability for Saturday’s game at Virginia has not been determined… Linebacker Tavares Gooden has not been cleared to play because of a head injury… Sophomore offensive tackle Reggie Youngblood (knee) practiced lightly and will hopefully be ready for Saturday, Coker said… Coker also revealed that center/guard A.J. Trump may have an ACL injury. “It was disappointing because he was playing awfully well on Saturday. He has a lot of energy and plays extremely hard. He’s a good athlete and I’m very, very disappointed for him,” Coker said about Trump’s injury… Senior offensive lineman Alex Pou was back at practice (injury) on Monday… Wide receiver Rashaun Jones has been suspended for two games due to a violation of team policy and will not play on Saturday, Coker said.