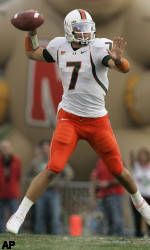 COLLEGE PARK, Md. (AP) – In a season filled with negatives, Miami regained a measure of respect in an emotionally draining defeat.

Playing five days after the shooting death of teammate Bryan Pata, the Hurricanes performed valiantly before falling to No. 23 Maryland 14-13 Saturday.

Trailing 14-0 early in the second quarter, Miami could have quit. Instead, the Hurricanes banded together and gave the Terrapins all they could handle until the comeback bid finally ended on a fumbled punt with 74 seconds left.

“I really felt like Bryan Pata would have been proud of the effort our team showed tonight,” Miami coach Larry Coker said. “I’m very proud of the way they fought back. It says a lot.”

Pata was killed outside his apartment complex after Tuesday’s practice. He appeared in 41 games with the Hurricanes, starting 23, and was a big part of a unit that came in ranked third in the nation in rushing defense.

Miami carried on in his absence, limiting the Terrapins (8-2, 5-1 Atlantic Coast Conference) to 56 yards rushing.

The Hurricanes (5-5, 2-4) decided to play the game because, as many players put it, Pata would have wanted it that way.

“All of us were so close to him. It’s pretty hard to take that he was there one minute and not there the next,” said quarterback Kirby Freeman, who went 14-for-27 for 140 yards and ran for a team-best 78 yards in his first career start.

With Freeman leading the way, Miami closed to 14-13 before getting the ball at the Maryland 43 with 4:20 to go.

“On that last drive we had several guys saying, ‘Let’s win this thing for Bryan,”‘ Freeman said.

But Trey Covington intercepted a deflected pass at the Maryland 32 to end the drive. Miami then forced a punt, but Bruce Johnson fumbled the kick and the Terrapins recovered before running out the clock.

The Hurricanes lost the game, but earned the respect of their conquerers.

“I take my hat off to Miami,” Terps coach Ralph Friedgen said. “They played really well under a very tough situation.”

As a show of their admiration for the Hurricanes’ grit, the Terrapins voted to donate their per diem to the Pata family.

To remember Pata, the Hurricanes wore decals with his number (95) on their helmets. Miami hoped to further honor him with a victory, but Maryland wouldn’t comply.

“Physically I think we’re fine. Emotionally, I think it does take a toll,” Coker said. “How much a factor, I don’t know.”

Facing a two-touchdown deficit, Miami fought back behind a determined defense and play of Freeman, who replaced injured starter Kyle Wright. But Maryland held on for its fifth straight win despite making only six first downs.

It was the third straight loss for Miami, all to ranked opponents. The Hurricanes haven’t lost three in a row since 1999.

“I still think we’re a good football team,” Coker said. “I just don’t how much we have left in the tank.”

Maryland, meanwhile, remains in the thick of the Atlantic Division race. If the Terrapins beat Boston College next week and Wake Forest on Nov. 25, they’ll play in the ACC title game for the first time.

Sam Hollenbach completed TD passes of 65 and 96 yards to Darrius Heyward-Bey on Maryland’s first and third possessions. Hollenbach went 11-for-16 for 202 yards, and Heyward-Bey caught five passes for 175 yards.

Down 14-10, the Hurricanes held the ball for more than 10 minutes during a 77-yard drive that ended with a 25-yard field goal by Jon Peattie with 11:02 left. Miami was left wanting more, however, because wide receiver Ryan Hill dropped a pass in the end zone three plays earlier.

The Hurricanes’ next two chances ended with their only two turnovers of the game.

On the Terrapins’ second offensive play, when Heyward-Bey slipped behind Randy Phillips on the left sideline and grabbed Hollenbach’s pass in stride before sprinting to the end zone.

Maryland topped that on its third series. After a punt pinned the Terrapins on their own 4, Hollenbach lofted a long pass down the right sideline that Heyward-Bey gathered behind Glenn Sharpe and took the distance.

It was the longest pass play in Maryland history and the longest the Hurricanes ever surrendered.

Miami could have buckled, but instead rallied behind its backup quarterback and the memory of Pata.

“They didn’t give up at all,” Coker said. “In fact, I think they came back with more resolve.”

Peattie capped a 12-play drive with a 31-yard field goal, and the Hurricanes forced a three-and-out before Freeman threw a 28-yard touchdown pass to Ryan Moore to make it 14-10.

A scoreless third quarter was marred by a neck injury to Maryland guard Donnie Woods, who was taken from the field on a stretcher and airlifted to a hospital.

He was able to move his arms and legs before being taken from the field, Friedgen said.