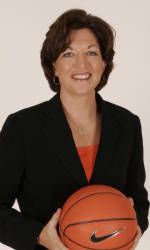 Catching Up with Coach - Part 1

Second-year head coach Katie Meier recently sat down with HurricaneSports.com, the official website of the University of Miami athletic department, to talk about the upcoming year. In part one of this two part series, coach talks about the outlook of this year’s team:

Hurricanesports.com (HS): Let’s assume I know absolutely nothing about the 2006-07 University of Miami women’s basketball team and decided to buy season tickets (www.hurricanesports.com/1-800-GO-CANES.) What kind of team could I expect to see game-in and game-out?
Katie Meier (KM): “Per our reputation, I believe we will be a very up-tempo team. I think we have one of the most dynamic groups of guards as I have every coached. I’ve coached teams that have had one or two really good scoring guards, but I think this team might be the first that I’ve ever been around that I feel that way about as a whole. They are threatening. They are aggressive. They are scorers and are very, very athletic. To some extent it will become a challenge dictating our style and our tempo. You know that has to be done with defense. You can’t just say we are going to run and not be an aggressive defensive team. We want to have around 65 percent of our scoring come off assists, which allows us to go with fast breaks. We’d like to generate over 90 possessions a game and we can’t do that without our defense playing well. We want to be one of the top four teams in the ACC in steals. That’s what we want to do and I think our team is capable of that.”

HS: Last season, with three really good scorers in Tamara James (21.5 ppg), Renee Taylor (15.6 ppg) and Melissa Knight (11.7 ppg), the offensive philosophy seemed to be pretty wide open and let the scorers score points. With the departure of James and Knight, who do you see stepping up as an offensive threat this season?
KM: “I feel like when you look at players like LaToya Cunningham, Albrey Grimsley, Brittany Denson returning having had significant minutes in their careers already, if those three players give us three more points a game on their average we are close to taking care of Melissa’s points. Three or four more points a game from those three is very realistic goal and should be expected. Of course, you’ve got Amy Audibert, who I think is going to give us the anchor in some of the things we want to do defensively. Amy also works so hard in the low post that I think she will contribute a little bit more offensively. Of the five newcomers, Maurita Reid obviously comes in as a known scorer and her performance in the National Junior College Championship Tournament last year was one for the ages. Then you have the three freshman and Carla Williams, who can score if our tempo is high.”

HS: One major difference between this season’s team and last season’s is depth in the post. How is having bigger and faster post players going to affect this team?
KM: “Depth is a function of how many players you have and a function of how many players are going to play for you. We only have ten players on the active roster this year, but all ten are going to play. I think there are rosters with fifteen that don’t have ten that can play, so I feel like now at this point in the season every player on this team is going to get significant amounts of time. I think where one of the weaknesses will be is that we be an inconsistent team in who is scoring. Last season we knew that most of our offense would be generated from Tamara, Renee and Melissa, and it won’t be that way this year. If we are going to be inconsistent in any area, I’ll take it on the offensive end. Defensively we will be a lot more consistent than we were last year because we have a lot more depth in the post.”

HS: Throughout your career you have coached players who, on the surface, might not have seemed to be most talented and most athletic but came to play every game and without a doubt out-hustled opponents. Can fans expect that same kind of work ethic from this UM team?
KM: “I love the pressure we can put on the ball, not just ball pressure on the guards, but the ball pressure that we can put in the post. We are very agile and very active in the post. Then we also follow that up with some size and athleticism with Kathryn and Amy. We have a couple more looks than we did last year. I think we’ll have a lot more tips and a lot more passing lane deflections. I think we are a reactive team.”

HS: Last season, after being picked to finish near the bottom of the ACC in most preseason polls, you became one of the surprise teams in the league, finishing sixth and earning a second-round berth into the WNIT. Facing similar odds this season, do you see this team meeting and exceeding some of those same challenges?
KM: “Last year’s team had a significant core of veteran players who had seen success throughout their careers. They hadn’t necessarily had a great season the year before, but they had won in the past. They knew how to get up out of the gate. This year I don’t know that we will jump out of the gate as well as we did last year because they were veterans and they understood what it took. We are doing a lot of teaching with the kids, as much as the NCAA will allow, just teaching and having them understand my terminology. It’s almost like last year all over again. Half the team is new. Luckily, the returning players are bridging the gap and helping them through it. I think in some aspects we are ahead of where last year’s team was in terms of understanding the offensive plays and that sort of thing. I don’t think I will know how good this team is until our first really close game. That’s when we’ll find out who is it in the last five minutes of the game that makes sure we win.”

HS: Let’s talk about the Atlantic Coast Conference which has become, without a doubt, the best women’s basketball conference in the country. This season you open ACC play at Duke, the 2006 NCAA runner-up, and two games later play defending National Champion Maryland in the ACC home opener. Also taking into consideration that it was North Carolina, and neither one of those teams, that won the ACC Championship and how nine of the 12 ACC teams advanced to the postseason, how challenging is it knowing that there are no easy games?
KM: “Last year I felt like every game was a great opportunity. I’ve been in conferences where you can get 20 or so wins, but still need a top 50 RPI-type win to get in the tournament and you look and there isn’t one left on your schedule. Then you look at the ACC; we had six conference wins last season and every one of them was a significant win in terms of how the tournament committees view us. When we approach the ACC season, we see a lot of great opportunities to play against some really great teams. I think when you are new to a program, you always look for maybe that one victory that can put you over the top. I think if you look at a team like Maryland, they really benefited from playing in the ACC and I think our program is in the position to do the same thing. The league can be very intimidating at times and this year we have a very difficult start, but we will also get a chance to know where we are early and figure out how to make adjustment. Overall, the challenges of the ACC are incredibly fun. I think I adjusted more last season than I had in any of my previous years of coaching.”

HS: Going back to that Duke game, how special will it be to head back to your alma mater as an opposing ACC coach?
KM: “That’s going to be something – coaching on the sidelines. I’m sure Duke will be a top five team. During the game I’m sure I won’t really think about it, but after the game I’m certain I’ll take a moment or two to reflect. It’s really amazing to me, being here at UM and being a part of the ACC, to have opportunities to play against not only some of the best teams and coaches in the country, but also against people you have played with and people who have coached you. You can really get caught up in it, but at the same time you have to keep in perspective that you have a team to coach. I’m always better when I narrow my focus and worry about what’s right in front of me.”

HS: Give me one word that would describe your mindset heading into the 2006-07 season?
KM: “Aggressive.”

HS: Why is that?
KM: “Certainly when you have a group of young players you don’t want to see paralysis by analysis. You don’t want to see players standing around waiting for something to happen. That’s not my philosophy. I’ve always been one of those coaches who tells players to go out there and make something happen.”

HS: You have mentioned very publicly that you foresee the University of Miami becoming a perennial powerhouse in women’s basketball. Are you happy with the progress that has been made thus far towards achieving those goals?
KM: “I think one thing that I’m very proud of is the progression that our players make once they’re in our program. The improvement that somebody like LaToya Cunningham made last year. I think you are going to see an incredibly improved Aubrey Grimsley this year. My staff does a tremendous job of making players better. Everyone thinks it’s all about recruiting and that is a big fact, obviously, but I also think that we`ve established a real desire to become better from within. That will be the key to how we do it here in Miami.”

Season ticket packages for the 2006-07 season start at just $75 dollars and include admission to all 15 home games. Fans can also purchase the Family Plan and receive admission to all home games for two adults and three children for just $100 dollars