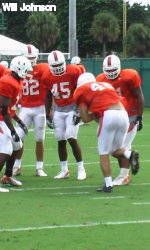 CORAL GABLES, Fla. – The Miami Hurricanes practiced under cloudy skies at the Greentree Practice Fields on Tuesday afternoon in with their sights set on a first-time opponent and nearby rival Florida International University. Located just 11 miles apart, the two schools, rich in local ties, will step on the gridiron together at the Orange Bowl on Saturday night.

While Miami (3-2, 1-1 ACC Coastal) is coming off a 27-7 confidence-building win against North Carolina, the Golden Panthers (0-6, 0-3 Sun Belt) are at the opposite end of the spectrum, losing a 25-22 dogfight at North Texas in an NCAA-record seven overtimes. But head coach Larry Coker is not expecting FIU to mail it in on Saturday.

Coker told reporters on Sunday that he though FIU should be commended for having the toughness to go through seven overtimes on the road. On Tuesday, he was more forthcoming about the Golden Panthers’ talent.

The game should offer fans some good home-cooking, being that most of the players on both rosters are from South Florida and 51 played high school football together. Bragging rights will also be at stake.

“There are a lot of very good football players in South Florida, and Florida International has a lot of those,” Coker said.

The goals for Miami are simple: Win and keep improving. FIU is the last non-conference foe the Hurricanes will face this season. Since the team’s loss to Louisville on Sept. 16, Coker has noticed marked improvement but realizes the team has a way to go to reach the ACC Championship game.

“I think coming out of the Louisville game, we needed to be somewhere else before we played FIU,” Coker said. “We created some turnovers at the end of the half (against North Carolina). Then in the two-minute drill we drove the field and score. I think it was 17-7 at half. That’s good football. I think those are the things that you have to understand.

The Hurricanes return to the Greentree Practice Fields at 3:20 p.m. Wednesday.