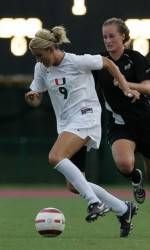 CORAL GABLES, Fla. – Senior defender Kristen Chapman has been named to the Soccer Buzz National Elite Team of the Week after guiding the Hurricanes to a pair of victories over two regionally ranked opponents last weekend.

Chapman becomes just the third player in UM history and the first since 2003 to earn a spot on the Soccer Buzz National Elite Team of the Week.

Miami looks to improve on its 2-0 start this weekend, heading to the UNC Greensboro Tournament in Greensboro, N.C. The Hurricanes open play Friday at 5 p.m. against High Point and return Sunday to face UNCG at 3:30 p.m.

Four different players registered goals in the Hurricanes first two victories, including junior Jessica Gillman who scored the eventual game-winner and later added an assist in the win over Samford.