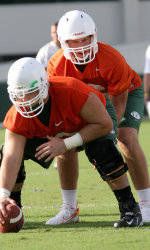 Coral Gables – If the old adage is true, that there is strength in numbers, then the Miami Hurricanes football team is getting stronger. Several players who were recently on the mend saw increased action in Thursday afternoon’s practice at the Greentree Practice Fields.

“We’re getting really close, as far as guys getting back in,” head coach Larry Coker said. “We have a lot of guys who want to play against Florida State.”

Although not patterned after Bill Parcells, Coker’s policy on playing guys who have been injured resembles that of the Dallas Cowboys’ head coach. “If you don’t practice, you don’t play,” Coker said. “If (the players are) healthy, they need to be in there, getting better and getting repetitions.”

Senior offensive lineman Alex Pou (wrist) was back practicing on Thursday, despite wearing a hard cast on his right wrist. Pou is a welcome addition, considering that he will be working at center, guard and possibly tackle, Coker said. Running backs Charlie Jones and Derron Thomas haven’t missed any action since coming back from minor injuries a few days ago.

Right tackle Tyrone Byrd was “back in the niche” on Thursday, but not ready to play. However, Coker stated that he is also comfortable with Chris Rutledge stepping in. Wide receiver Terrell Walden (knee) also saw limited action on Thursday.

Miami will practice again at 7:00 p.m. Friday at the Orange Bowl. The practice is closed to the media and the public.