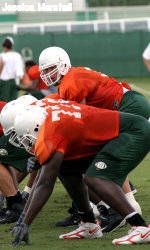 Coral Gables – You can always see more when the pads are on and everything is full speed. Head coach Larry Coker and his staff saw plenty in Monday morning’s workout at the Greentree Practice Fields, including a live scrimmage with game officials.

“We got to take a look at the guys and now we have some good video to look at,” Coker said. “We didn’t go very long, but we needed to do some live things and have a chance to evaluate and see what it looks like when the real football starts.”

Coker conceded that the defense is ahead of the offense at this point, certainly not an abnormality in the football world. “I think (the defense) played with more energy today than the offense,” Coker said. “The offense has to really dial-up the energy level.”

While the team still needs plenty of work prior to the Sept. 4 opener against Florida State, Coker has been content with what he’s seen from his team thus far. “We’ve had a good start. We have guys in good condition and I think we’re working well,” he said. “We need to make sure we have our assignments squared away and all those types, especially offensively.”

The big question surrounding the defense after the first week of practice was whether or not middle linebacker Darryl Sharpton is ready to step in if Glenn Cook is not ready to return from a knee injury in time for the opener. Coker did not seem worried.

“(Sharpton) is a very explosive player,” Coker said. “He can run. He’s tough. He loves to play the game and he’s smart. He’s all those things added together. Plus, he’s got a lot of football ahead of him. He’s a redshirt freshman. I’m very comfortable with him. Especially with the additional time (before the first game).”

Miami will conduct its second double session of the preseason on Tuesday, with practices at 8:20 a.m. and 3:20 p.m.