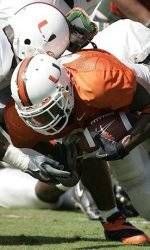 Miami – The Miami Hurricanes defense defeated the offense 31-14 in the annual spring game played Saturday morning at the Orange Bowl.

“The defense did dominate, and I think we have an opportunity to be an outstanding defensive team,” said head coach Larry Coker. “We ran the ball a little better today than we have in the spring, but we didn’t pass and catch the ball very well. That was the big thing today. Our defense had a great day today.”

Kirby Freeman was intercepted twice and Charlie Jones fumbled once, giving the defense 18 of its 31 points.

Jones led the team with 38 yards on nine carries, causing Coker to say, “You saw what Charlie Jones can do, and Andrew Johnson and Derron Thomas stepped up and made some plays. We had some mismatches and injuries on the offense, which really hurts the continuity. The main thing is, we have to get everybody back healthy. We have a lot of work to do offensively.”

Wright, who completed 8 of 14 passes for 45 yards, said, “We did some good things. There were some bad things, but that’s why we practice. I’d rather make a mistake now than down the road – that’s what spring practice is for. I knew I wasn’t going to get too many reps. It was kind of disappointing to end the spring like that, but the offense has been very solid all spring. We know what they can do. For the most part, I thought we did all right. Both the offense and defense ran very vanilla schemes, keeping it simple. The defense is going to be tough.”

Coker said Wright’s plays were limited, as well as that of tight end Greg Olsen. “We don’t need to see a lot more of Kyle,” Coker said. “We didn’t see Greg at all in the second half.” Olsen was the game’s leading receiver, with four catches for 19 yards. Jon Peattie kicked a field goal for the offense, which scored the rest of its points on first downs. Freeman completed 6 of 17 passes for 26 yards. Among the running backs, Jones carried nine times for 38 yards, Johnson had seven carries for 19 yards, and Thomas had 14 carries for 47 yards.

Safety Kenny Phillips recovered a fumble on the game’s second series, and safety Lovon Ponder and cornerback Bruce Johnson made interceptions for the defense. The defense made the rest of its points from stopping the offense.

Approximately 9,000 fans attended the spring game, including former Hurricanes star wide receiver Michael Irvin and ex-NFL star Cris Carter. The next time the Hurricanes will appear the Orange Bowl will be September 4, Labor Day night, against the Florida State Seminoles.