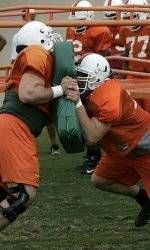 Coral Gables – The Hurricanes conducted their third day of practice on Friday. The team practiced in shells (pads and shorts) for the first time.

“Today was a good day, our first day wearing pads. Players were pretty efficient,” said head coach Larry Coker. “We will scrimmage a little tomorrow and finish off the first week.”

“This spring is really important for us. I see a lot of players getting better. Defensively, guys are flying around and having a lot of fun. On offense, I see a lot of teaching going on, and we’re getting to be a better football team,” added Coker.

Coker commented on the only 2006 recruit who is with the team, Richard Gordon, a tight end who enrolled in school in January after spending the fall at a prep school. “He’ll definitely play right away,” said Coker. “He’ll play tight end and H-back. He runs a 4.4 40 at 265 pounds. He has great hands. He’s tough. There are a lot of things about him that makes me think he can help us this fall.”

The team dodged an afternoon-long thunderstorm with an off day on Thursday, practicing under cloudy skies and cooler weather on Friday.

The Hurricanes will practice again at 9:30 a.m. Saturday, the first session in which the players will wear full pads. The annual spring game and the BankUnited CanesFest will be held at 10:00 a.m. Saturday, April 15 at the Orange Bowl and is free to the public.